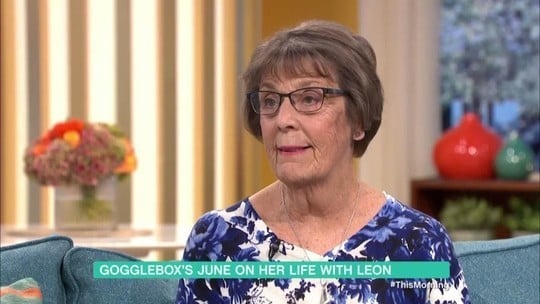 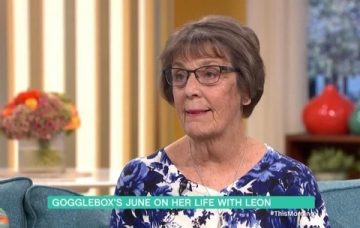 This Morning viewers were left heartbroken

Gogglebox favourite June Bernicoff left TV viewers in tears as she revealed her heartache over the loss of late husband Leon, saying: “I can’t remember life without him.”

The 81-year-old appeared on This Morning on Friday just nine months after his death to talk about a book she’s written about their lives together.

And it seems the project has helped June cope with the passing of her husband of nearly six decades, bringing up happy memories of how they first met.

Asked by hosts Ruth Langsford and Eamonn Holmes about life without Leon, she said writing had helped soothe the pain of her grief.

“Fortunately I’ve been very busy because I was approached to write the book,” she said.

“That’s been wonderful because it has given me a purpose, to think back about things, to set aside part of the day to write.

“At first it was just the sadness because you just remembering the last few days he was really ill, whereas going back to when we met and all the fun we had.

“There was lots of fun to be had.”

June, who met Leon when she was just 18, added: “We always had a lot of fun. Growing in our jobs, having our families.

“Quite honestly, I can’t remember life without him.”

Many viewers were affected by the touching tribute, revealing on Twitter how they were choking back tears.

Tearing up watching June talk about Leon on #thismorning 😢

I’m in tears, Ruth is in tears. Leon was so loved. June is coping so well. Gogglebox isn’t the same without them. 💔💔 #ThisMorning

Retired teacher June recently said she could never return to the Channel 4 series that launched them both to TV fame, even though she feels it is “still a big part” of her.

“In a way, even though I am no longer part of the show, Gogglebox is still a big part of me,” she said.

“Being involved in the show so late in our lives provided us with a host of unexpected pleasures.”