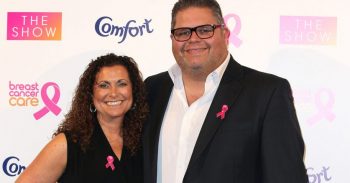 He says he feels better than ever

The TV favourite, 51, said he piled on the pounds by slobbing out in front of the telly all the time.

But Jonathan has now managed to cut his weight from 21st 3lbs to 18st 8lbs, simply by eating healthier and exercising.

What’s more, his previously 44-inch waist has shrunk to 38 inches.

Before his new diet, professional chauffeur Jonathan would chow down on a full English breakfast and snack on unhealthy treats throughout the day.

At home with his wife Nikki and their children, Josh, 21, and Amy, 19, Jonathan would regularly tuck into takeaways while watching TV.

When doctors eventually diagnosed him with Type 2 diabetes, he made the decision to live a healthier lifestyle.

According to The Mirror, he admitted that keeping the weight off has “always been a struggle” as he loves to eat.

Jonathan explained: “I’ve lost weight a few times, through cutting out the rubbish in my diet and upping the exercise, but over the years the pounds have slowly crept back on.

“I’ve never been one for short-term quick fix diets.

“For me it’s always been about making a lifestyle change – not just wanting to lose a few pounds for a special occasion.”

He now maintains a healthy calorie intake of around 1,800 a day, with meals such as porridge for breakfast, vegetarian lunches and dinners including healthy stir-fries.

Jonathan has already noticed an improvement in his flexibility and said he now feels, physically and mentally, better than he ever has before.

The Tappers are, unfortunately for fans, not part of the new series.

Shortly after that, it was confirmed that the whole Tapper family would not be returning.

A statement from the show’s producers, as reported in OK! magazine, said they are “currently on a break but have not left the show”, although no date was given for their return.

-Gogglebox is on Channel 4 at 9pm every Friday

Do you miss seeing the Tappers on Gogglebox? Leave us a comment on our Facebook page @EntertainmentDailyFix and let us know what you think.