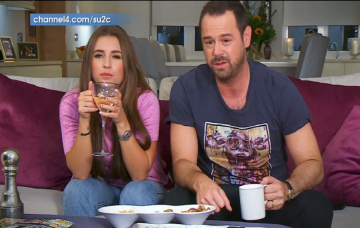 EastEnders favourite Danny Dyer had Gogglebox viewers in stitches last night as he joined daughter Dani to be a couch potato critic for a Stand Up To Cancer special of the Channel 4 show.

The celebrity pairing proved a hit with fans on Twitter as they reviewed the likes of University Challenge and The Yorkshire Vet from his fancy home in Essex.

But while their banter-filled commentary went down a storm, there was one aspect of Danny’s behaviour that left many admirers more than a little put out.

The 41-year-old Mick Carters actor’s de-socked toes on the table in front of him – and in full view of the camera – was a sight apparently several observers could not tolerate.

“Can’t be dealing with Danny Dyer’s bare feet right in my face,” said @Scotthopper1, adding a green-faced, queasy-looking emoji to his message.

And @molly_tranmer asked: “Anyone else getting freaked out by Danny Dyer’s feet?”

One onlooker suspected the state of Danny’s feet may reveal more about his domestic cleaning routine.

Read more: Danny Dyer warns Dani and Jack about having kids too soon

“Danny Dyer has moles on the soles of his feet. Or he hasn’t vacuumed,” claimed @SamHun3.

And there were others who became increasingly distracted by Danny’s ‘dirty’ trotters, too.

“Danny Dyer’s dirty feet are getting on my nerves,” confessed @noreenk86.

At least Danny’s plates of meat will live long in the memory of @LolaBellaX.

Expressing her amusement with four laughing emojis, she tweeted: “All I keep thinking is… Danny dyer has dirty feet.”

And @jasonives agreed, insisting the ends of Danny’s legs had stolen the Friday night show.

Earlier in the week, soap star Danny called on viewers to support the charitable efforts of SU2C.

He said on Instagram: “We all need to come together and raise some serious reddies to try and combat this nasty evil thing that takes far too many lives.”