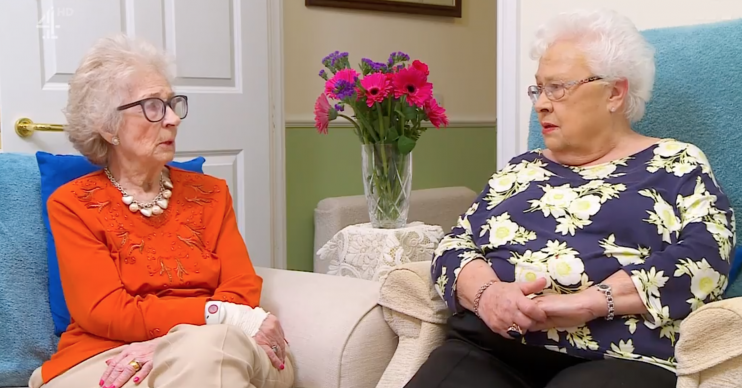 She had Mary in stitches

Gogglebox fans were left in hysterics after watching last night’s show, with Marina making a hilarious confession while watching ITV’s The All New Monty.

The show, in the spirit of the film The Full Monty, saw several celebrities unite for a strip tease to raise awareness for prostate cancer.

Read more: Scarlett Moffatt admits she ‘looks good as a man’ with short hair and beard

Gogglebox favourites Mary and Marina watched the show together, and Marina took the opportunity to share her hard-earned expertise on the subject of stripping – revealing she’d once got a little too close to a stripper.

“I went to one at the four seasons, and then I went to another one at the Millionaires Club along Stapleton Road,” she said.

“And they come right up close to you, they dance on the tables, see, they come around.”

She went on to describe the moment one of the strippers came so close to her that he knocked her glasses off her face.

“So I was in the corner having a sort of drink and a laugh and that, they come right up to me. I turned my head, because I had my glasses on, my glasses went like that, and there’s a great big [bleep] in my face.”

Mary was immediately overcome with laughter, saying, “Oh, I can’t believe that you said that!”

Fans took to twitter after the unexpected revelation, sharing their reactions.

Oh my word. Mary and Marina – what a night that must have been down the Millionaire’s club! 👓 askew 😂#Gogglebox

Loving Mary and Marina, they’re so lovely, have me in stitches tho in tonight in #Gogglebox!

Obvs Mary & Marina never had any trouble with their sex lives, pair of dolls! 🙌😂 #Gogglebox

Mary and Marina make me laugh so much! I want to go for a night out with them! #gogglebox pic.twitter.com/XMhYSg3o0q

“Oh my word. Mary and Marina – what a night that must have been down the Millionaire’s club!” one fan said.

“Marina gives me life… I want to be her when I’m older,” tweeted another fan.

What did you think of Marina’s story? Leave us a comment on our Facebook page @EntertainmentDailyFix and let us know.