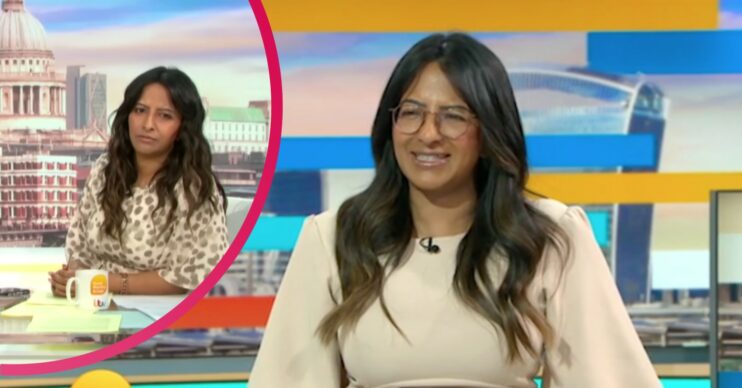 GMB presenter Ranvir Singh has thanked fans and issued an update on her heath after pulling out of presenting duties.

The 44-year-old was pulled off air on Tuesday (29 March) amid fears for her health.

She was replaced by Louisa James after advice from resident medic, Doctor Hilary Jones.

Poor Ranvir struggled through her news bulletin after telling hosts Susanna Reid and Richard Madeley that she’d woken up with severe hayfever.

While Dr Hilary told Ranvir to ditch her contact lenses and swap them for glasses, Richard said she had the ‘worst hayfever’ he’d ever seen.

Keeping fans in the loop, Ranvir took to Twitter this morning (Thursday March 31) and gave an update.

Thanks for all the guidance on my streaming sore eyes this week! It was an allergic reaction to something more than tree pollen as the skin around my eyes has gone paper thin and sore 🙁 Anyway I’ll be hosting @lorraine tomorrow and for all of next week – sorry for my face 🤡!

What is wrong with Ranvir Singh from GMB?

She wrote: “Thanks for all the guidance on my streaming sore eyes this week! It was an allergic reaction to something more than tree pollen as the skin around my eyes has gone paper thin and sore.

“Anyway I’ll be hosting @lorraine tomorrow and for all of next week – sorry for my face.”

Ranvir added a clown emoji to highlight her embarrassment over her condition.

GMB viewers flocked to the social media network to offer their support and advice.

(NB – we cannot confirm any of their medical qualifications.)

One viewer suggested: “It could be Blepharitis, that’s a miserable condition around the eyes. Those heated eye patches are good and help to relieve pain and itching. Good luck.”

Another said: “I had something similar a few years ago and couldn’t get to the bottom of it – I thought it was some sort of hayfever too until I realised it was the wipes I was using to take my makeup off. I’ve been fine since I stopped using them. I hope it clears soon for you x.”

“Just glad you are feeling better Ranvir I know someone who went through the same thing,” a third said.

Someone else tweeted: “Could still be hayfever, my eyes are like that at times. Put some petroleum jelly on your eyelids.”

Support has also flooded in from fans telling Ranvir not to apologise for her face.

“Don’t be sorry I love your face!” insisted one tweeter, while another agreed, adding: “No sorry needed, beautiful face.”

On Tuesday’s show, Ranvir’s co-hosts worried for her as her eyes streamed while she was reading the news.

When Ranvir finished her bulletin, Richard said: “Hey, credit to you. You’ve got the worst hay fever I think I’ve ever seen.”

Ranvir said: “I don’t know what’s going on. That’s why I look like this today.”

Richard replied: “I thought you were going to have to stop half way through, are you alright?”

But the next bulletin saw Louisa James take Ranvir’s place as it appeared to be too much for her.

After Susanna asked how Ranvir was doing, Louisa explained: “She’s okay, well we think she’s going to be okay.

“We think Ranvir may have had an allergic reaction. She’s got a sore eye. She’s just resting.”

Ranvir tweeted at the time, saying: “Anyone else got the worst most painful stinging hay fever they’ve ever had? I can barely keep my eyes open.

“If there was a vaccine for this I’d sign up asap,” she said, adding a sad face emoji.

The good news is that she’s well enough to step in for Lorraine Kelly tomorrow (Friday April 1) and for the rest of next week.

Catch Ranvir on Lorraine at 9am from Friday April 1 or catch up on ITV Hub later.