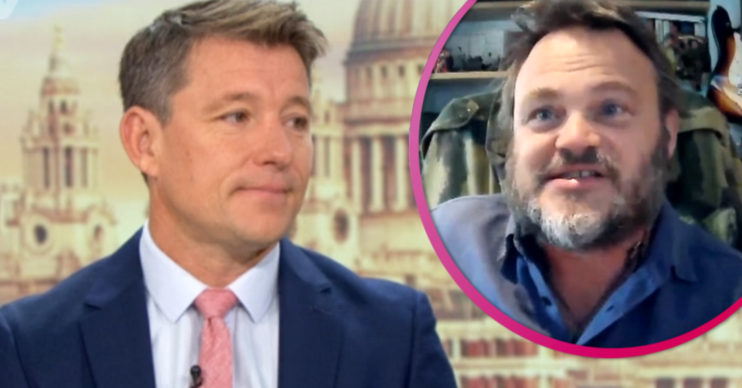 GMB: Ben Shephard warns comedian Al Murray as he ‘swears’ on the show

Al flicked his Vs during his rant

Ben Shephard told off comedian Al Murray after he swore on this morning’s episode of Good Morning Britain (Thursday September 3).

The presenter, 45, stepped in after Al – who found fame playing the Pub Landlord – went a step too far.

What happened when Ben Shephard apologised?

In a discussion about the BBC’s decision to crack down on left-wing comics, Al let rip.

“The thing is if people really want more right-wing comedy they’re going to have to vote for a left-wing government.”

He continued: “Whether you agree with it or not the job of a comedian is to cause mischief and say the unsayable, and also to flick Vs at the government.”

“I mean honestly, we’re supposed to be gargoyles, causing mischief and trouble.”

At that moment he backed up his statement by flicking his own Vs at the camera.

What else did Ben Shephard say?

That’s when Ben felt the need to give Al a telling off.

He warned: “Be careful of the Vs this early in the morning Al.”

Why has the BBC been causing controversy?

Al’s tirade against the BBC is the latest controversy for the broadcaster.

Last month, news emerged that it was thinking of banning iconic songs Land Of Hope and Glory and Rule Britannia from Last Night Of The Proms.

Both songs contain controversial lyrics. The anthems have been accused of being associated with colonialism and slavery.

The BBC’s decision provoked fiery debate and outrage in some quarters.

Piers Morgan erupted into a rage during a discussion with activist Femi Nylander on GMB.

“I love the Last Night of the Proms, it plays to all the great parts of Great Britain, the patriotism, coming together, singing joyfully,” he said.

“I think it’s the wrong battle to pick, most people in the country don’t find it offensive.”