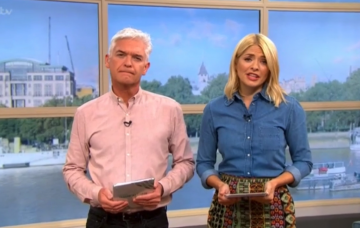 Viewers weren't happy with the choice of words used

This Morning and Good Morning Britain have come under fire for their coverage of Dame Barbara Windsor’s Alzheimer’s diagnosis.

During Thursday’s GMB, Susanna Reid and Kate Garraway discussed the heartbreaking news that Barbara has been secretly battling the disease for four years.

The duo spoke to Barbara’s close friend Richard Arnold about the news, but viewers weren’t happy that the actress was being referred to in the past tense.

Kate told viewers: “We’re going to talk now to our entertainment editor Richard Arnold, who of course has always followed Barbara’s career and she was a great friend of yours.

She added: “You were both so fond of each other,” before quickly correcting herself to “aren’t you”.

Richard got choked up as he discussed his dear friend.

“Absolutely Kate,” he replied. “It saddens me deeply this news this morning for it to finally become public.”

“She loved her public and for Scott to go public about her condition shows just how much they mean to her,” he continued.

“Barbara Windsor, when it comes to national treasures, she is the jewel in the crown. For me as someone who has followed her career closely and calls her a friend.

“I take great comfort from the fact Scott is by her side, utterly devoted to her, to see her through the next chapter.”

It wasn’t long before viewers took to Twitter to question why the EastEnders legend, who played Peggy Mitchell in the soap, was being referred to in the past tense.

One person asked: “Why are #GMB doing this as if Babs is dead?”

“Not sure why #GMB are talking about Barbara Windsor as if she’s died!” another ranted.

And it wasn’t just Good Morning Britain that came under fire for referring to Barbara in the past tense.

The duo sat down with Loose Women star Jane Moore, who broke the news after interviewing Barbara’s husband Scott Mitchell.

“You were lucky enough to call her a friend,” Holly said to Jane. “She was in your group of friends.”

Holly and Phil finished the segment by sending Barbara a message.

“Barbara, if you’re watching today then you know we all love you,” Phil said. “Sending lots and lots of love.”

But viewers weren’t happy with Holly’s choice of words when discussing the actress.

On Thursday, news broke that Barbara has been diagnosed with Alzheimer’s.

Scott said his 80-year-old wife has kept the news secret since first finding out on April 22, 2014.

“Since her 80th birthday last August, a definite continual confusion has set in, so it’s becoming a lot more difficult for us to hide,” he told The Sun.

ED! has contacted both Good Morning Britain and This Morning for comment.