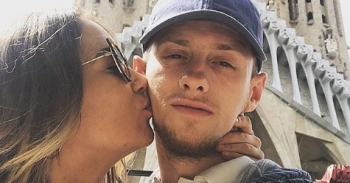 The girlfriend of Britain’s Got Talent contestant Jack Saunders has paid tribute to him following his tragic death.

Jack, who made it through to the semi-finals of the upcoming series – was found dead on Sunday after he took his own life aged just 25.

His girlfriend Frankie Hurst took to social media to express her heartbreak over his death.

She wrote on Instagram: “I still cannot get my head around all of this but yesterday heaven gained the most special angel, my soul mate, my best friend, my right arm.

“I can’t even find the words to begin but no one ever showed me as much love as you did, every single day and I’m eternally grateful for you.

“I’m so lucky to have experienced the love that we have and I’ll forever carry that in my heart. The kindest, most considerate person who is loved by soooo many people, and I just wish you realised how many people you have impacted on.

“You’re going to missed so much Jack. So so much.”

She added: “I promise that everything I do will be for you, I’ll make you proud every single day just like you use to say.

“You never wanted to grow up, ever, and now you’ll forever be our Peter Pan, counting down the days till we reunite dancing in the stars (minus the arguments when we tried to choreograph).

“I love you so more than words can describe, forever and always #SexyBeast #Mr&MrsSexyBeast.”

Jack’s mum Sandra also paid tribute to her son, telling The Mirror: “We don’t know why he did it, he didn’t leave a note. He did not have depression. He went to the GP before Christmas because he was feeling tired and they never spotted any problems.

“It’s just shocked everyone because to other people Jack had it all. Jack achieved more than many people could dream of achieving. He knew we loved him. I think he was a Lost Boy. He must have felt just like a lost boy, bless him.”

His sister Kayla Williams added: “Suicide awareness is getting better but there is still a bit of a stigma, but it can happen to anyone. The message we want to share about Jack’s death is how important it is to talk to people, and tell people how great they are.”

Read more: Amanda Holden reveals she has a favourite out of Ant and Dec

A spokesman for Britain’s Got Talent told the newspaper: “Our thoughts and condolences are with Jack’s family and friends during this difficult and devastating time.”

A memorial event for Jack will take place in Stratford on Sunday.