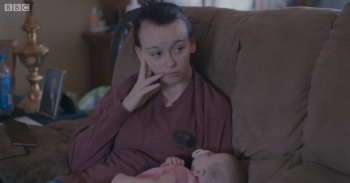 She said the marriage was "horrible"

A 15-year-old girl married a 24-year-old man after falling pregnant with his baby.

Keri is one of tens of thousands of children legally allowed to marry – often older men – in 18 states across America, where there’s no lower age limit for marriage.

Keri, now 21, was just 15 when she found out she was expecting a baby with her boyfriend Paul.

Keri revealed she and Paul found out he was being investigated by the police and, to avoid charges of statutory rape, Paul – who was nine years her senior – suggested they get married.

She was living with her father and met Paul through her cousin while celebrating her 15th birthday at a house party.

Paul and Keri had an one-night stand and she fell pregnant.

The legal age of consent in South Carolina is 16, although teenagers as young as 14 are able to consent to sex as long as the partner is 18 or younger.

Paul discovered that if he married Keri, it might make the investigation go away, so he popped the question.

However, Paul still needed Keri’s father – who “liked to drink” – to give consent so he bought him a crate of beer.

Keri explained: “[Paul] was my cousin’s friend and we slept together and I found out I was pregnant.

“[It was his idea to get married] because he wanted to avoid going to jail for statutory rape.

“If my dad wanted to, he could press charges. [Paul] talked my dad into signing the marriage license for us.”

“It did make me mad but I was eager to get out of the house because he’s not a dad.”

Keri’s marriage to Paul lasted two years and she described it as “horrible” and accused him of treating her “like a maid”.

She was unable to finish school because she had to work and care for their child.

Keri has now re-married and has three children, including her first son with Paul.

Paul never faced a criminal charge and admitted he married Keri to avoid going to jail.

He said: “When I found out she was pregnant, I started to like her more. The police were looking into it and I did it to avoid a statutory rape charge.”

Paul claimed he thought Keri was 18 when they had sex as she had a fake ID that said she was 18.

Insisting that he wasn’t a “paedophile”, Paul added: “Paedophiles are people who like 10 and younger, that’s sick and nasty and takes advantage of people who don’t know what they’re doing.

Read more: GMB viewers outraged as woman insists ‘being gay is a choice’

“I’m not attracted to teenage girls but I have no regrets because we were both in love and you have to follow your heart because love comes in all shapes, sizes and ages.”

In January this year, South Carolina passed a bill to make it illegal to marry anyone under the age of 16.