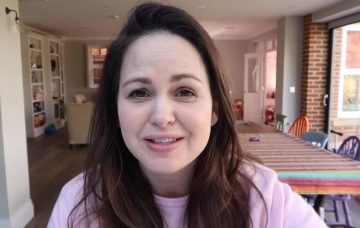 Just when you think you've got it picture perfect!

We’ve all been there – trying to gather the whole family or friendship circle for a group photo to remember a momentous occasion.

It’s a nightmare trying to get everyone to have their eyes on the camera and smiles fixed all at the same time to capture the perfect portrait.

But when you then add little people to the equation, it’s game over – as Tom and Giovanna Fletcher discovered as they tried to take a shot to mark the end of their holiday at Walt Disney World.

Sharing a pic on Twitter, she joked about her little boy doing a runner from the camera.

One of our favourite famous families have been sharing some special time together in Florida, as Giovanna gently cooks their third baby.

At the start of the trip, she showed off her blossoming bump in a picture alongside pals, including Tom’s sister, Carrie.

The mum of two, who is five months pregnant, captioned the shot with a red heart and the words: “Bumping along!”

She also shared pictures of the holiday gang sightseeing and visiting all the theme parks, which appeared to have left Tom exhausted.

During a quiet moment back at the hotel during the busy break, Giovanna revealed to fans that she is preparing to take another giant step in life… by dyeing her hair!

In an Instagram Stories video, she said: “I have so many grey hairs coming through now – it’s everywhere!

“So I’m going to do a bit of a colour. Maybe a toner, as I’ve heard toning will help. Maybe like a home kit?

“Anyway, it’s just not getting any better. The greys are getting worse, children didn’t help, life didn’t help, so I’m going to try my hand at that. Let’s see what happens!”

How do you get little ones to pose for pics? Leave us a comment on our Facebook page @EntertainmentDailyFix and let us know what you think!