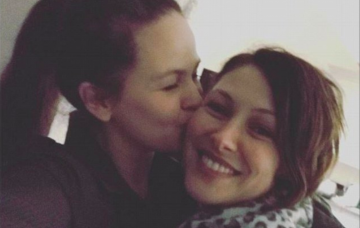 Emma has the magic touch!

TV presenter Emma Willis revealed last week that she wants to one day help deliver a baby, and it sounds like she once came pretty close!

On Monday, Giovanna Fletcher posted a touching birthday tribute on Instagram to her “hilarious friend”, joking Emma may have once sent her into labour!

Beside a four-year-old picture of the pair, cuddled up together when author Giovanna was pregnant with her first son, Giovanna wrote: “Each year, on the night before Buzz’s Birthday, this picture comes up in my Timehop.

“I’m not sure if my waters had gone by this point (I did stay and eat my dinner) or if it was Emma’s touch that made Buzz decide he was ready to break free, but I was so glad Emma was by my side that night.”

The pair are both married to members of boyband McBusted, who combined Busted and McFly in 2013 to form a supergroup.

Giovanna is married to Tom Fletcher, and the pair have two children, Buzz and Buddy, two.

They recently announced a third child is on the way.

Emma, 42, is married to Matt Willis, and this weekend the pair celebrated 11 years since they got engaged.

Giovanna’s 950k followers loved the sweet words. One wrote: “Aww this is so lovely actually got a bit emotional myself. Two beautiful woman inside and out!! 😍.”

Another added: “Your friendship is rare, lovely to see it. I would be as proud as you are. Love the both of you as people, inside and out.”

A third commented: “What a lovely moment to have captured and how lovely that you have that special friendship..treasure it, they don’t come around often x.”

The pair have gushed about each other before.

Last October, Giovanna posted a picture of Emma with their children.

She wrote: “We used to drink hot tea and cake while having a natter… now we run around after this bunch and leave a trail of unfinished conversations behind us. Life is good (but hectic).”

The Voice presenter replied to the pic: “Gosh you are bloody wonderful.. love you Gi.. it’s very weird writing this when you’re sat opposite me on my sofa…”

Giovanna, who has a mum podcast, told The Sun about their friendship in 2016, saying: “Emma and I have always been close. She’s a great mum and role model.”

Read more: Emma Willis reveals that delivering a baby is on her bucket list

It comes just a week after Celebrity Big Brother presenter Emma admitted it’s on her bucket list to deliver a baby – or at least see one being born.

The TV host is a proud mum to three children – Isabelle, eight, Ace, six, and one-year-old Trixie – but, as she told Daily Star’s TV Life magazine, she didn’t really get to watch the process.

When asked what’s on her bucket list, she said: “I want to deliver a baby, or at least see a delivery. I think it would be incredible to witness. I missed mine because I was at the other end.

“I need my little sister to have a baby, really. I could be her birthing partner.”