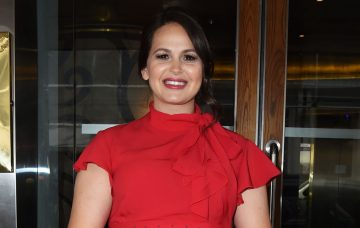 Blogger and author Giovanna Fletcher took to Instagram to share an adorable shot of her two boys having a day in the sun at their Uncle Mario Falcone’s house.

The shot shows the boys – four-year-old Buzz, and two-year-old Buddy lounging on deck chairs in the back yard.

The Fletcher family is getting ready to grow by one, after Giovanna and husband Tom announced they were expected their third child back in March.

Giovanna showed off her growing bump with an Instagram post yesterday – with the photo showing her sitting on the couch, a son on each side.

The image was captioned “I do love snuggles… one question though, when baby three comes along, where will they fit into the standard child under each arm formation? Xxxx”

The third pregnancy has had a few frustrations – Giovanni spent a long Instagram post complaining about people who felt the need to comment on the size of her bump.

She posted a bright pink image with the words “You’re big!” in the middle of it. The caption outlined how upsetting it can be to have people comment on your size when you’re pregnant.

“3rd pregnancy… 10 weeks (potentially) to go… how many more times do I have to hear this every time I leave the house?” she said. “It’s a little deflating, especially when it comes with an ‘Oh gosh’ before it.”

She went on to encourage other pregnant women to try to ignore the comments.

“Just want to give a shout out to all those mums who are having people commenting on the size of their bumps, whether big or small. Remember, these comments don’t come from health professional or people in the know… they’re just comments. Perhaps something to say. A bit of pointless smalltalk that’ll play on your mind but not on theirs… bat it away.

“Your body is doing an amazing thing right now and your focus should be on the little human you’re growing. Remember how lucky you are to be in this position when so many others would love to be. Your body is a miracle. It doesn’t need the approval of anyone else. Focus on the love! Xxxx #mybumpnotyours #bodypositivity”

The post drew a lot of responses, with many people commenting to say they had experienced similar comments.

“I was 20 wks Friday and got asked last week if I was due this week when I replied with no November – he said “you poor poor girl” haha Thanks 👍🏼🙈🤣” one person responded.

“I had the opposite. ‘You’re really 30 weeks? You’re so small!!’ The worst thing I could hear when I was already having extra growth scans to make sure my baby girl was growing ok,” another fan said.

“At 6 months pregnant (with one baby) I was asked was I having triplets because I was so huge. 😧” said another.

Have you had people make unwanted pregnancy comments? Leave us a comment on our Facebook page @EntertainmentDailyFix and let us know.