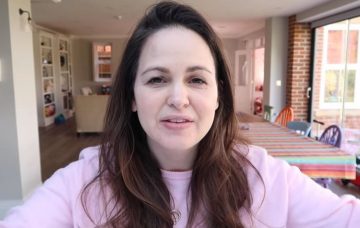 She's such a forgiving mum!

The mum-of-two, who also has son, Buzz, four, added a photo of the two-year-old looking innocent, beside a door covered in scribbles.

She wrote: “‘You turn your back for two seconds…’ is a phrase we’ve all heard countless times when hearing about the wild / cheeky / explorative adventures of children.

Her 950k followers found the picture funny, with one writing: “That FACE though! You couldn’t get mad… 😂😍.”

Another commented: “You are beautiful inside & out. A fantastic Mother, Wife, Daughter, Sister, Aunt & friend. You’re also very intelligent, you shine x.”

A third added: “The adorable look of innocence 😊.”

It comes after the podcaster posted a touching birthday tribute on Instagram to her “hilarious friend”, Emma Willis on Monday.

Next to a picture of the presenter, she joked that the Celebrity Big Brother star may have once sent her into labour!

Beside a four-year-old picture of the pair, cuddled up together when Giovanna was pregnant with her first son, Giovanna wrote: “Each year, on the night before Buzz’s Birthday, this picture comes up in my Timehop.

“I’m not sure if my waters had gone by this point (I did stay and eat my dinner) or if it was Emma’s touch that made Buzz decide he was ready to break free, but I was so glad Emma was by my side that night.”

The pair are both married to members of boyband McBusted, who combined Busted and McFly in 2013 to form a supergroup.

Giovanna is married to Tom Fletcher and they recently announced a third child is on the way.

What’s the cheekiest thing you’ve ever seen a child do? Leave us a comment on our Facebook page @EntertainmentDailyFix and let us know what you think!