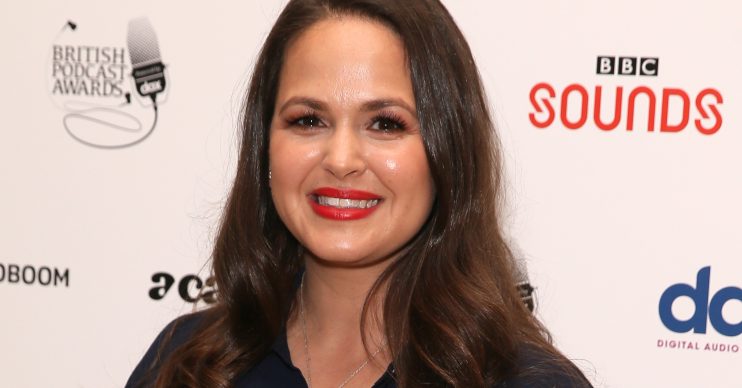 The mum-of-three has run around London in just her knickers!

Giovanna Fletcher has bravely stripped down to her knickers and run around London in an effort to “celebrate women’s bodies”.

Giovanna, who is married to McFly star Tom, has today taken part in a 10k event in just her pants and a crop top.

The mum-of-three, 35, is very keen to celebrate body confidence so agreed to do the Vitality London 10,000 as part of the #celebrateyou challenge.

This meant that, together with 1,000 other women, Giovanna completed the run in her knickers to “celebrate women” of all shapes and sizes.

Minutes before setting off on the course, which took her past Buckingham Palace, Giovanna uploaded a picture of herself to Instagram.

Wearing a pair of black pants, she told her followers: “The body glitter is on, the clothes are off… @vitalitylondon10kxx.”

Giovanna had also posted a snap of herself and Tom’s sister Carrie, who completed the run in a floral ‘lady garden’ pair of knickers.

She later updated fans with a selfie outside Buckingham Palace before confirming she had finished the 10k a short while later.

She also shared a clip of herself and Loose Women star Andrea McLean, who also completed the run in her underwear.

Giovanna only gave birth to hers and Tom’s third child, a son called Max, in August last year.

She has spent recent months training for the event and kept fans up-to-date with her progress on social media.

The night before the race, she shared a photo of a giant plate of spaghetti bolognese and admitted she was looking forward to “soaking up the atmosphere”.

She said: “I know you’re meant to carb load before a marathon, so I have adopted this tradition ahead of tomorrow’s 10k.

“For me, tomorrow will be about being with the other 1,000 women who’ve signed up as part of the #CelebrateYou campaign.

“I’m looking forward to laughing our way around the course as we give each other encouragement and support (whilst in our undies). I know I’ll complete the 10k but tomorrow is not about times.

“It’s about being with those incredible women and soaking up the atmosphere of the day. I’m very excited! Xx.”