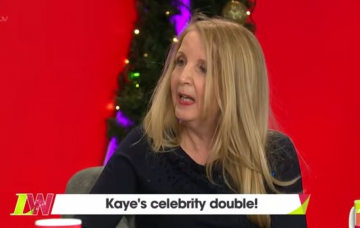 She has never been one to hold back her opinions, and today Gillian McKeith bemoaned that she was made to wear a dowdy outfit to appear on Loose Women!

The TV nutritionist complained about the wardrobe choice on this Wednesday’s ITV show (19 December), claiming she was forced to change her outfit when she arrived at the studios.

The You Are What You Eat star, 59, had come dressed in the same clothes as her teenage daughter, Afton, and didn’t seem impressed at being put in something different!

She explained: “I had to change it for this. I looked down [at my jumper] and went, ‘Oh my god…’ I was wearing the same designer as my daughter. I wear British-based designer mainly and I love things that are different.”

She also managed to insult Loose Women host Kaye Adams – who was dressed the same after a running joke that the women look alike.

Gillian told 55-year-old Kaye: “There’s nothing wrong with your outfit, it’s just a little bit frumpy that’s all. I mean if I could shorten it that’d be OK!”

Uh oh… we’ve invited @kayeadams‘ celebrity ‘lookalike’ to be today’s Ho Ho Who guest! Can you guess who it is?
Tune in at 12.30pm to find out! @ITV @WeAreSTV pic.twitter.com/0a3jJ7ne8q

Gillian, who became renowned for inspecting people’s turds on her health show, told the presenter she had “the perfect” poo.

Apologies if it’s tea time where you are…

Gillian went on to insist that age shouldn’t define what you wear.

And one of her daughters, who was in the Loose Women audience, insisted that she found their matching outfits “adorable”.

What do you make of Gillian’s comments? Leave us a comment on our Facebook page @EntertainmentDailyFix and let us know what you think!