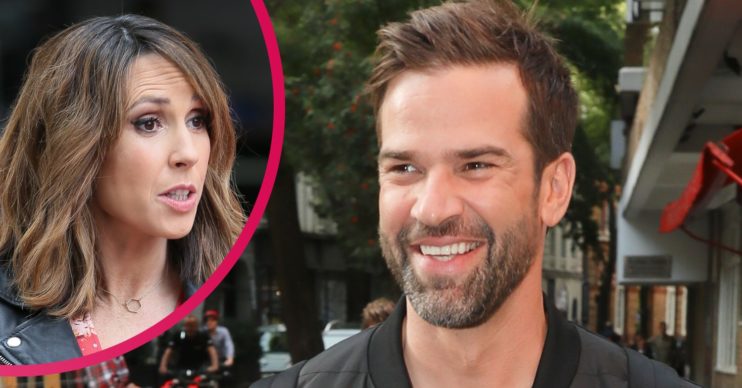 He's on all week

The One Show star Gethin Jones poked fun at his co-host Alex Jones as they joked around backstage this week.

The Welsh telly favourite and Celebrity MasterChef star, 42, is currently serving as a guest presenter on the BBC programme.

What did The One Show star Gethin Jones say about Alex Jones?

Taking to Instagram on Monday (August 17), Gethin mocked Alex as he revealed she had been giving him tips on his style, and how to pose for a good picture.

He uploaded a photo of himself behind the scenes at The One Show studio, standing with the bottoms of his trousers pulled up to his calves, one leg cocked slightly, hand held casually in his pocket.

Behind him in the snap, Alex grins as she photobombs him.

Style and pose advice from @alexjonesthomson tonight! Conga provided by the legend that is @gloriaestefan and a nipple ripping chat with Simon Mayo! Happy Monday!

Gethin was doing an impression of Alex’s photo showing off her outfit for the evening, which he shared for his own followers.

He wrote in the caption: “Style and pose advice from @alexjonesthomson tonight!”

And actress Emma Barton told him: “Nailed it!”

One of Gethin’s fans gushed: “How can you still look hot wearing your trousers like that?”

Style and pose advice from Alex.

Another admirer wrote: “Wowza… No need to say anything else!”

Someone else joked: “@gethincjones sorry Gethin, Alex wears them better.”

Gethin, who will be on The One Show all week, had a laugh last night (August 18) when he and Alex interviewed actor Shaun Williamson.

The former EastEnders actor spoke to the presenters via video link from a hotel in Chippenham. He said he was there recording the audio version of his new book, out this October.

At the end of the chat, Alex accidentally called Shaun ‘Barry’, which was the name of Walford character he played for 16 years.

The blunder had Gethin in stitches, as he keeled over on the couch laughing and admitted it was “hard not to” mix Shaun up with his Albert Square alter ego – a role he played for 10 years.

Do you enjoy having Gethin on The One Show? Leave us a comment on our Facebook page @EntertainmentDailyFix and let us know.