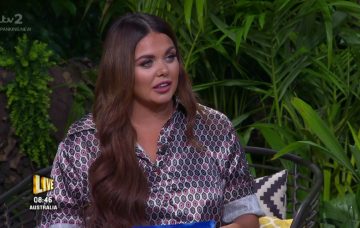 The pair have both won the series before

They were both crowned Queen of the Jungle, but Scarlett Moffatt and Georgia Toffolo are said to have had an ‘awkward’ encounter on I’m A Celebrity’s Extra Camp.

Fans were already upset that Toff, 24, as the winner of the previous series, did not appear at the final to hand over the crown to the new winner Harry Redknapp.

Instead, Scarlett stepped in to crown the former football manager this year’s King of the Jungle.

However, it’s been reported that Made In Chelsea star Toff was made to feel “unwelcome” and “upset” by the way Scarlett treated her when she appeared on the spin-off show earlier in the series.

A source told The Sun: “[Toff] flew out to Australia for Extra Camp but she was upset while she was there because of Scarlett’s attitude towards her.

“There were major issues on set and there’s a lot of bad blood between them. Toff doesn’t know what sparked it, but she was made to feel very unwelcome and upset by the way Scarlett treated her.”

However, a source close to Scarlett, 28, denied the claims of a feud, saying: “She loves Toff and they have never had a falling out.”

ED! has contacted representatives for Scarlett and Toff for comment.

What a time to be alive! Cyclone with @hollywilloughby (her first trial and she bloody smashed it) & my big brothers! #imaceleb #love #bestlife #cyclone #extra #camp

It comes after Scarlett revealed she had lost her luggage on the return journey from Australia after she slept through the show’s wrap party.

Taking to Instagram, she confessed: “I fell asleep and now I’m going to sleep and it’s not even 7pm. So, I’ve missed another wrap party, guys. But do you know what? I’m just used to it now at least I’ll get a decent sleep.”

But things seemed to be going better for Scarlett once she got back to the UK, as she shared her Christmas plans on Twitter.

She wrote: “So jetlagged I confused dates & times so today & tomorrow I get to spend the whole day with my favourites!!

“My mam today for our annual Christmas party (a party consisting of just us two ha) & tomorrow me, my mam, dad, aunty Kirsty & nanny get to see my little sister’s play.”

She was also keen on working alongside her new friend Emily Atack on Extra Camp next year.

When a fan commented on her Instagram post: “Emily for extra camp next year”, Scarlett excitedly replied: “Yasss would be so fun.”

Who do you want to see heading into the jungle next year? Leave us a comment on our Facebook page @EntertainmentDailyFix and let us know what you think!