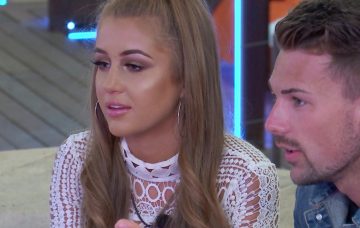 Love Island’s Georgia Steel could have a BIG decision to make after newcomers Idris Virgo and Kieran Nicholls BOTH make it clear they fancy her.

The 20-year-old is currently coupled up with Sam Bird, 25, but can’t hide her excitement at the fact two new boys enter the house on Tuesday night’s episode.

Georgia declares: “We’ve got two new boys. I love boys. There’s nothing wrong with a little harmless flirt every now and again is there? A little wink here and there. I’ve got to keep Sam on his toes at the end of the day.”

But little does Georgia know the two new guys BOTH have their eye on her.

Personal trainer Kieran, 26, and boxer Idris, 25, both name Georgia as one of the girls they fancy in the villa, which isn’t exactly good news for Sam, especially after the villa girls predict Georgia’s head could be turned.

Sam confesses in the Beach Hut: “I really like her. There’s no one else in the villa for me. It’s not nice seeing the person you like talking to a couple of new lads but it is what it is.”

Idris is particularly interested in Gee, saying he’s “drawn towards her” and bluntly telling Georgia she’s the girl he wants to crack on with.

He quizzes Georgia on how it stands with Sam and she replies: “Obviously I am very loyal. I’m a very loyal girl. Very loyal. And when I am with someone, I am completely loyal unless I am honest with them, tell them how I feel, then I crack on.”

Idris has competition from Kieran, however, who surprises Georgia by pulling her away from a chat with Sam.

Georgia tells Kieran: “It’s really nice to have some new people in the villa, it’s really refreshing. Me and Sam are a really new couple and we’re getting to know each other day by day… it is chilled.”

She privately adds in the Beach Hut: “Kieran was very bold. I was sat with Sam enjoying the sun. Next thing you know, Kieran pulls me for a chat. He doesn’t really pull me for a chat, he tells Sam to get gone. Ballsy.”

Kieran then asks Georgia if she’d like to spend time with him as he reckons they’d have a good thing together, leaving Georgia with a big decision to make…

Not good news for Sam!

There’s more bad news for Sam to come as both new boys are given the chance to invite one girl out for a date.

We’ll find out tonight who they choose but either way, Sam’s a bit worried Georgia’s head could be turned when he’s starting to fall for her.

Sam pulls Georgia to one side and tells her: “I’m buzzing it’s become something more and I hope if you do go on a date with one of these guys, that solidifies that a bit. I think Kieran is definitely looking at you. He’s trying to get in my head a bit.”

Georgia simply says: “My eggs are up in the air at the moment. They haven’t landed in any baskets whatsoever.”

Do you think Georgia and Sam make a good couple? Leave us a comment on our Facebook page @EntertainmentDailyFix and let us know what you think!