He is determined to return to his BBC News role

BBC newsreader George Alagiah will take a break from TV due to the latest developments concerning his cancer battle.

It was announced this afternoon (Monday October 18) that doctors wish to treat a new tumour immediately.

The 65-year-old has also expressed his determination to return to his job once his treatment has been completed.

The BBC News journalist has been diagnosed with “a further spread of cancer”, his agent confirmed.

He is scheduled to undergo chemotherapy and radiotherapy over the coming months.

It was announced in a statement: “George Alagiah, presenter of BBC News at Six, Britain’s most watched news programme, is to take a break from studio duties to deal with a further spread of cancer.

“He was first diagnosed with stage 4 bowel cancer in April 2014. In a letter to colleagues in the newsroom Mr Alagiah said his medical team had decided to hit the new tumour ‘hard and fast’.”

Looking forward to returning to work

The statement also noted how his role has played a part in the newsreader’s recovery so far.

It continued: “He added that working on the programme ‘has kept me sane over the last few years’ and ‘I’m determined to come back’.”

A BBC spokesperson said: “We are all wishing George well and look forward to seeing him back in the newsroom.”

Veteran broadcaster Alistair Stewart added: “George Alagiah is one of the finest newscasters in the business, and a lovely guy. I wish him well as he strives for a full recovery.” 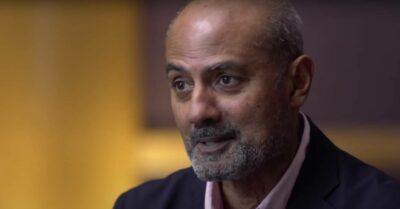 Dealing with cancer and coronavirus

The father-of-two underwent 17 rounds of chemotherapy following his first diagnosis seven years ago.

Last June, it was reported that cancer had spread to his lungs, liver and lymph nodes.

I suspect most people living with cancer, we live with uncertainty all the time.

And just weeks later, George explained how cancer had helped him deal with coronavirus.

He said during an appearance on Good Morning Britain: “I can only speak for myself but I suspect most people living with cancer, we live with uncertainty all the time.

“We go from scan to scan that’s usually every three months and you never know what that scan is going to turn up.

“So we’re better at getting ready for that kind of thing.

“In a sense, I got the COVID business into a kind of perspective I think.

“Mentally, it didn’t worry me as much as you might imagine.”

Reflecting on his condition

In December of 2019, George said that he does not fear death.

Speaking on the How To Fail podcast, he said: “No I’m not [scared], actually. I’m not for myself, that much I know.

“And I’ve had to work through it in my head because I’m one scan away from perhaps knowing that that thing is going to happen sooner rather than later.