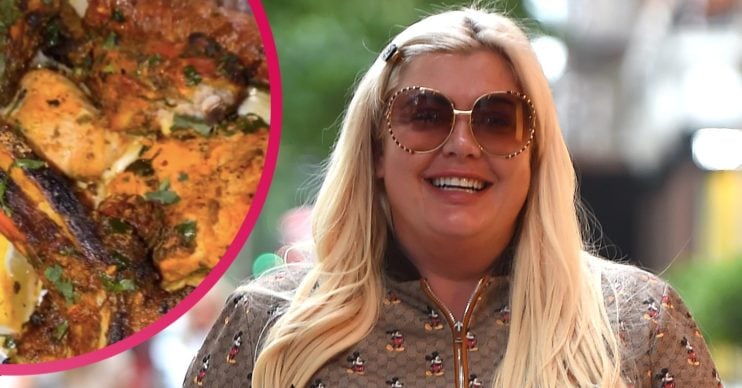 Gemma Collins treats herself to a takeaway after losing another 5lbs

The Diva Forever star says she 'earned it'

Gemma Collins has treated herself to a delicious takeaway after losing yet more weight.

The GC, 40, confirmed on Friday that she has lost 5lbs after embarking on another diet plan.

Gemma has already shed an impressive 3st and is far from ready to throw the towel in.

But on Saturday night (May 1, 2021), the star gave in to temptation and ordered a takeaway.

She did, however, ensure she picked a ‘healthy option’ tandoori dish.

Taking to Instagram, Gemma has shared a picture of her yummy meal with her fanbase.

She wrote: “Thank you @tandoorilounge for a lovely dinner with salad and a little rice. Nice healthy one. Earned it.”

Gemma then posted a picture of her cleared plate, saying: “Guys, do you know what, this is well and truly earned.

“I’ve decided not to go for the rice, so I’ve had chicken, a bit of kebab and just a little bit of Makhani chicken.

“It’s really spicy but, do you know what, not too much sauce and absolutely beautiful.”

The Diva Forever star also revealed that she had “washed it down” with some Evian water.

Since appearing on Dancing On Ice in 2019, Gemma has been on a huge health kick.

She has tried various methods to slim down – including controversial weight loss jabs – and has so far lost a whopping 3st.

Last week, the star told fans she has shed another 5lbs after joining up with online coach Scott Francis.

Scott compares himself to a Sergeant Major, previously saying: “I have more of a hard line approach.”

Gemma had previously revealed that she is following a ‘high fat’ diet that has been tailored to her.

Speaking to New! magazine, she said: “I don’t weigh myself every week. Although, to be honest, I did this week and I lost another half a stone.

“I’m on a high-fat diet. It’s all personal, though – what works for me won’t work for you. But it’s not really about what the scales are saying, it’s about how you feel.

“I’m not putting a label on it. I feel amazing, it’s nice to be getting into smaller clothes, but more than anything it’s nice to feel healthy.”

Following her Indian feast, Gemma got up on Sunday morning and headed straight for some Cryotherapy.

It is believed that standing in freezing cold temperatures can help burn fat cells.