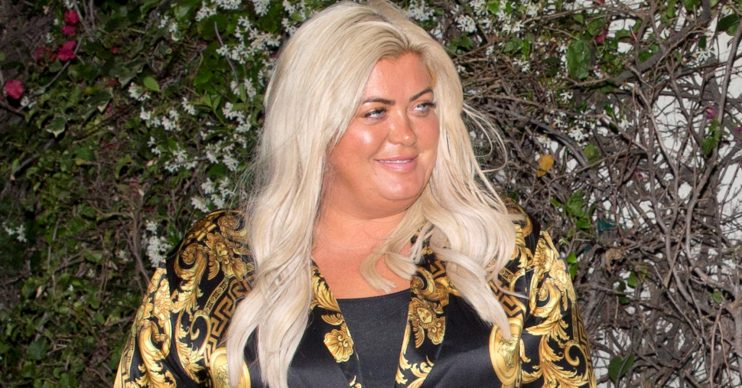 She had a very radiant glow!

Gemma Collins suffered an epic fake tan mishap as she touched down in Los Angeles on Monday.

The former TOWIE star, 38, has jetted off to America to try and crack Hollywood.

Gemma has only been in the states for a day, however, she’s already had the paparazzi follow her as she lives it up across the pond.

Read more: Gemma Collins indulges in fast food as she arrives in Hollywood

The star was papped on Monday night dressed head-to-toe in Versace outside the Chateau Marmont Hotel.

But it seemed Gemma had been lathering her body in fake tan as she sported a glow.

In one photo, the star’s hands looked an orange shade while her feet were a similar colour.

Gemma left London on Monday and arrived in Los Angeles after a 10-hour flight.

And in true diva style, the reality TV queen has taken 11 suitcases with her for the trip.

The star has also shared a string of videos and photos to her Instagram, including one of herself in a car as her driver held a box of In-N-Out Burger – a popular fast food restaurant in the states.

In the video, Gemma said: “So, I’ve got the best driver. Hey Paul! Driver to the GC whilst I’m in LA.

She shared a photo of the trio standing outside restaurant Chateau Marmont.

In a video shared to her Instagram Stories, Gemma told fans: “I’m in LA. It’s unbelievable here. I can not even tell you. It’s unreal.”

Gemma first discussed her intention to head to America in March.

Speaking on The Jonathan Ross Show at the time, Gemma said she had “never been to LA” but was confident the cameras would be all over her “the minute” she touches down.

What did you think of Gemma’s fake tan? Leave us a comment on our Facebook page @EntertainmentDailyFix and let us know.