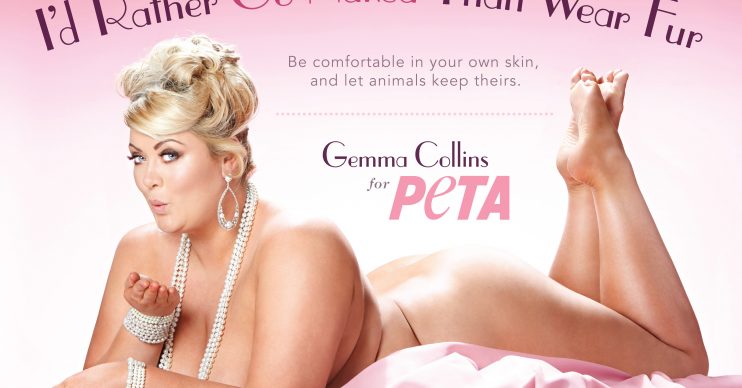 Fans praised her for raising awareness

The Dancing On Ice star went nude for the ad in 2013 but has re-posted the image to her Instagram to make a point.

Gemma, 39, revealed the animal rights group is ending their Rather Go Naked Than Wear Fur adverts because almost every designer has stopped using fur.

I’m proud to have been a part of this iconic campaign! After 30 years, @petauk is ENDING their #RatherGoNaked Than Wear Fur ads. Nearly every designer has stopped using fur AND cities and countries are banning it all over the world. Fur is DEAD. #changingtheworld #humanityrestored

Read more: Gemma Collins issues plea to MI5 amid fears her phone has been ‘bugged’

Gemma also revealed cities and countries around the world are banning it.

The image shows the reality TV star lying on a pink silk sheet with pearls around her wrist and neck as she blows a kiss to the camera.

I’m proud to have been a part of this iconic campaign!

The photo is accompanied with a message which reads: “I’d Rather Go Naked Than Wear Fur.

“Be comfortable in your own skin, and let animals keep theirs. Gemma Collins for PETA.”

Gemma wrote: “I’m proud to have been a part of this iconic campaign! After 30 years, @petauk is ENDING their #RatherGoNakedThanWearFur ads.

“Nearly every designer has stopped using fur AND cities and countries are banning it all over the world. Fur is DEAD.”

One person said: “Yes, Gemma! Fur belongs to the animals who were born with it.”

Another wrote: “You look stunning Gemma.”

A third added: “Amazing campaign and you look beautiful Gemma.”

Read more: Gemma Collins ‘stormed off’ TV show after Vinnie Jones implied he was ‘too good’ to star alongside her

Last month, Gemma declared she’s giving up meat this year and is opting for a veggie diet.

She said in a video on her Instagram Stories: “So this is second of Jan, or third of Jan – I’ve lost all track of days. We have gone fully vegetarian – well, Russel’s a vegan.

“I’m joining in. We’ve got Tofu… I’m doing this. This is the year of not eating meat. I don’t feel good [when eating meat].”