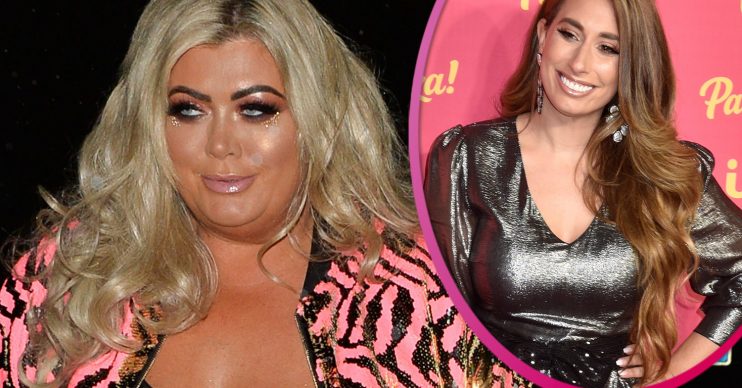 The nation came together to show support for the NHS

Gemma Collins, Stacey Solomon and Rochelle Humes were among the celebrities clapping for the NHS last night.

On Thursday evening (March 27) at 8pm, the nation came together to clap for the NHS and key workers currently risking their lives to help those affected by coronavirus.

Initiative Clap For Our Carers invited the British public to join in a collective round of applause to say thank you to NHS staff.

Read more: Coronavirus: Princes George and Louis and Princess Charlotte clap for our NHS and carers

Stacey and Gemma were left in tears over the emotional tribute – which was set up by Annemarie Plas.

Mum-of-three Stacey shared a video to her Instagram Stories showing her and baby son Rex clapping.

She wrote: “I don’t even know if you can hear but the whole street is clapping and I had to stop the camera because I was about to burst into tears.”

In another video, a tearful Stacey added: “I’ve never felt luckier to be in isolation with my family knowing that there’s so many incredible people out there risking their lives.

Former Dancing On Ice star Gemma was also left emotional and thanked the NHS on her Instagram.

“It was really emotional to see everyone coming together at this time.

“Everyone’s in the unknown at the minute and it’s just amazing that everyone came out and showed their support.

“It’s just a really scary time, I didn’t think I’d be this scared but I am. We’ve just got to stay calm and hope this goes away really quickly.”

So emotional right now THANK YOU NHS and everyone on the front line ❤️ I wanted to post this video to anyone who is feeling unsettled right now #clapfornhs👏🏻👏🏻👏🏻👏🏻 #clapforcarers @nhsenglandldn THANKYOU @nhsenglandldn facing this is scary, unsettling and worrying I am no different to anyone else 🙏🏻 and we are all in this TOGETHER 🙏🏻 if anyone is alone I am sending you so much extra love and hugs right now 🙏🏻 if your scared worried or feel vulnerable please please please pick up the phone to someone 🙏🏻 #clapfornhs👏🏻👏🏻👏🏻👏🏻 PAY RISE for all the NHS WORKERS @rishisunakmp @borisjohnsonuk please make this a PRIORITY 🙏🏻

David and Victoria Beckham and their family also joined the nation in clapping for the NHS.

In a video shared to the former footballer’s Instagam, David and his children Harper, eight, Cruz, 15, and Romeo, 17, showed their support.

It was really emotional to see everyone coming together at this time.

Victoria is heard saying: “Us Beckhams are all clapping to show our thanks to all the people working so hard in the NHS.

“All the doctors and nurses keeping us safe.”

David added: “We’re so proud of you guys. Thank you so much.”

Rochelle Humes clapped along with her daughters Alaia-Mai, six, and Valentina, three.

In a video on Instagram, the This Morning star said: “Say thank you NHS. Keep clapping. We love you. We couldn’t do it without you,” as her daughters repeated after their mum.

Dad-of-four Peter Andre and his family also clapped along as they thanked the NHS.

In a video, the star said: “Yay to the NHS staff! Love you NHS.”

Peter, whose wife Emily is a doctor, captioned the post: “A million round of applause from us here at home to the wonderful @nhswebsite @nhsmillion and all key workers.”

This Morning presenters Eamonn Holmes and Ruth Langsford were also showing their support on social media.

Ruth shared a video of herself clapping and whistling outside of their home.

She wrote: “It’s not much but it shows we care.”

It’s not much but it shows we care. #clapourcarers #nhs @nhswebsite

Piers clapped and cheered outside his home in Kensington, London.

He wrote: “That was brilliant…”

👏 👏 That was brilliant.. #clapforourcarers #NHS

Read more: Woman who set up Clap For Our Carers tribute stunned by nation’s response

It was captioned: “To all the doctors, nurses, carers, GPs, pharmacists, volunteers and other NHS staff working tirelessly to help those affected by #COVID19: thank you.”

Thank you to the NHS staff and key workers working extremely hard during this time.