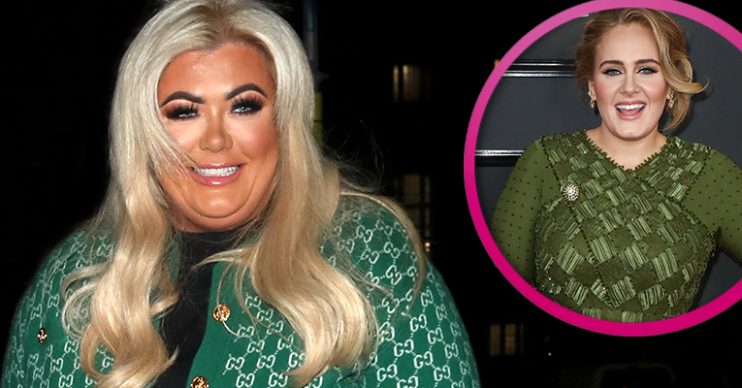 She's sending out an SOS!

Adele – who has been linked to rapper Skepta following her marriage split last year – recently hit the headlines after losing seven stone.

Speaking on her BBC Sounds podcast, Gemma said: “I want to know Adele how you lost weight, was it being in love with Skepta?”

As if to prove her suprerfan status, Gemma then burst into song.

“Adele, if you’re listening, hello, it’s me, it’s the GC and I wanna know what diet that you did, it’s been so long that I can’t lose it, so can you lose it. Hello from the other side, Adele can you help me out?” she sang.

Adele, this is an SOS honey, let’s all go to the gym together because she looks incredible!

Gemma added: “Adele, this is an SOS honey, either send Skepta over here or let’s all go to the gym together because she looks incredible! I’m sure Adele sat there one day and felt like me.”

Chatting to her pals Ryan and Lucas on the podcast, Gemma – who revealed she was going vegetarian at the start of the year – also revealed that she had turned down a £1m deal to record her own fitness DVD.

She said it was because she was unwilling lose huge amounts of weight for the DVD and added: “I actually like my body.”

Gemma said: “Fitness DVDs are so boring. I got offered to do so many of them and I just want to put it out there, they wanted me to weigh ten stone and they were like: ‘We’ll pay you a million pounds if you get down to ten stone.'”

She added: “I said keep your million pounds. At the end of the day, that is not normal for someone like me to actually really get so slim that, it just wouldn’t be right for me so I said no.”

Gemma has said that she is now ready for marriage and kids with on/off boyfriend James Argent and wants to get herself in tip-top shape so that she can fall pregnant.