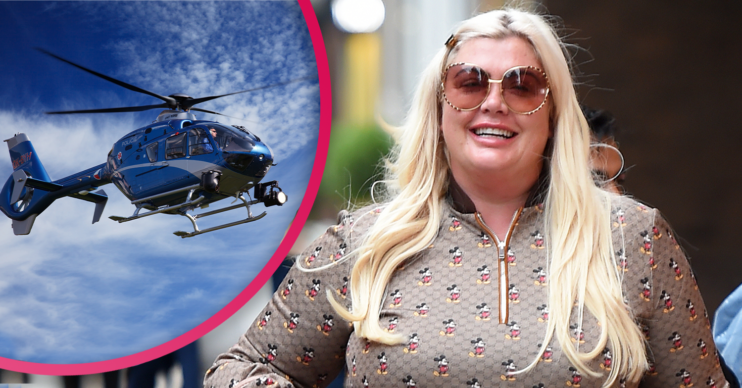 We're not sure the neighbours will approve…

She’s known for her diva-like antics, but we didn’t think even Gemma Collins could push things this far.

News reaches us that the TOWIE star has grand plans for her new home. Or, rather, sprawling Essex estate.

Gemma is planning on pulling out all the stops and has revealed she wants to install a swimming pool and a helipad at her new gem-encrusted not-so-humble abode.

Grand plans for her new home

The star spoke about her plans for the house – which she is yet to complete on – on her podcast.

She said she was “so excited” for the move and revealed it’s going to be a “big project”.

In news that’ll no doubt thrill her neighbours, it appears Gemma also has plans for an Ed Sheeran-style neighbourhood.

Her parents, Joan and Alan, recently put their house on the market and are reportedly keen to move into a second property Gemma is building on her land.

I definitely want a helipad. I would love a swimming pool with a mosaic with my face at the bottom.

“So you know it is going to be quite a big project for me. I’m planning to build on the land behind so it really is going to be something where I’m going to have to ask, do I want tennis courts?” she said.

Gemma added: “I definitely want a helipad. I would love a swimming pool with a mosaic with my face at the bottom.”

The Diva In Lockdown star also gave an insight into what the inside of her humble abode would look like.

And, if seems, she wants to steer clear of Essex-style crushed velvet sofas but go big on her love of one particular colour.

“Currently my style is pink. If you come into my home now, I’ve got this big pink ostrich feather lamp, I love pink and gold together.

Read more: Holly Willoughby trolled over expensive outfit as fans beg her to cut her hair

“I love animals in the home, I think it’s because I dream of having a farm one day.”

Indeed, on the podcast Gemma decided she wanted to have cows, chickens, sheep and zebras living with her on her land.

She also wants some furry friends to live inside with her, revealing she’s planning to get “some cats”.

The star also has grand plans for her kitchen.

She revealed she wants a horse statue with a pink saddle on it and a disco ball coming out of it’s mouth to take centre stage.

She’ll also have a baby grand piano covered in crystals.

“I do think I will have one calm room in the house. However it has to be GC style,” Gemma said.

Revealing she wants a home to reflect her colourful personality, it certainly seems she’s heading that way if these early plans are anything to go by!

Head to our Facebook page @EntertainmentDailyFix and tell us what you think of Gemma’s plans.