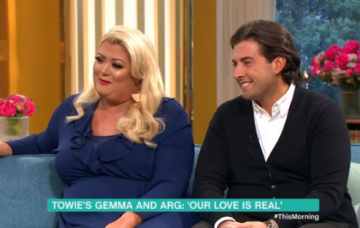 TOWIE couple want a family together one day

Gemma Collins has revealed some good news in her quest to have children with boyfriend James ‘Arg’ Argent in the future.

The TOWIE star had previously been told she would struggle to conceive because of a low egg count and having polycystic ovaries, which can make ovulation irregular.

But on Monday’s This Morning, the 37-year-old told Holly Willoughby and Phillip Schofield her odds have changed since seeking a second opinion on her fertility.

“Just recently I went and got a second opinion. My follicles have started growing again, which was absolutely amazing. I burst into tears when I found out. I said ‘is this happening?'” she said.

“The doctor said to me,’you are under no pressure, there’s no rush.’ So that was the most amazing day of my life so far this year.”

Now she knows the clock isn’t ticking as urgently on her time to have a baby, Gemma said she’s reluctantly decided to wait to start trying with James.

She said: “Since then, we was arguing a bit. I think, in my head, every girl wants that fairytale. You end up getting the guy you want to be with. You dream about living in the nice house with the babies all sitting round the table.

“I never thought I was going to get that, now I know I can have the children, it’s like let’s enjoy me and James first.”

James, 30, agreed, saying he would “definitely” love to have children but doesn’t want to rush into it.

He said: “I think me and Gemma need to be really stable and steady. Let’s get a nice long duration where everything is running smoothly first.”

The couple are finally beginning to have that period of smoothness after buying a place together in Spain and setting up a joint bank account.

Gemma said she is loving being domesticated after being single for so long, especially as she once thought she would never have a future with James.

She admitted that after seven years of loving him, she finally decided to get over him as it was “too much of my time emotionally invested in this person that doesn’t love me back” – only for him to then turn around and say he wanted to be with her.

James said of his change of heart: “I was always adamant that we were better suited as friends… but when we had some time apart, I realised how much I missed her and liked her.”

He admitted he had always “played down” his feelings for Gemma, which is why they are now being hit with accusations their relationship is a “showmance”.

Both denied this was the case, saying their feelings and love is real.