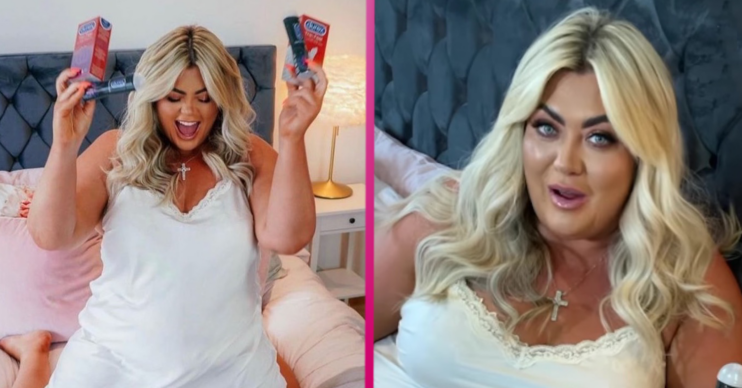 It's part of a team up with Durex

Gemma Collins has proved that boyfriend Rami Hawash is a very lucky man indeed as she stripped to a sexy white negligee for a new team up with Durex.

The TOWIE star posted a series of Instagram Stories and a grid post early this morning announcing her new campaign.

Gemma could be seen posing on her bed holding a selection of Durex products.

And it’s fair to say that GC fans are “obsessed” with her new ad.

Posting bright and early and making some fans “choke on their muesli”, Gemma announced the team up.

She said: “Who is ready for a #hotgirlsummer?! I know I am!

“That’s why I have teamed up with my friends @Durex to help the nation get #BackWithABang now that restrictions have eased.”

She then announced she had helped to create “a roadmap back to sexual satisfaction to make sure everyone is feeling SATISFIED in the most safe and sexy way after such a long time in lockdown!”

She added: “It’s all about the physical, emotional and equipment (condoms, lube and the rest) baby!”

Gemma then added her daily dose of body confidence.

“We have all seen changes happen to our bodies over lockdown – so my tip for you is to own these changes.

“I want everyone to feel in love with their own bodies when they eventually get back out there and start getting romantic again. Sexiness comes from within remember!”

There was a mixed reaction, but a lot of people declared it was the “best influencer ad ever”.

Another said: “Obsessed with this.”

“Living for this ad,” another commented.

Read more: Gemma Collins strips off as she struggles in the heat

Others wondered how Gemma and boyfriend Rami were managing to get saucy in the middle of a heatwave.

“It’s to hot for all that,” quipped one.

“Please tell me who tf is having nooky in this weather!” said another.

However, others cruelly accused Gemma of being willing to “flog anything”.

One said: “Why Gemma? You’re too good to be doing an ad for Durex!”

Another added: “Honestly is there nothing you wont flog?”

A third said: “You’d jump on the bandwagon for anything wouldn’t you.”

So what’s happening with Gemma Collins and boyfriend Rami?

The condom team up did raise a few eyebrows, especially as Gemma recently hinted that she and Rami were trying for a baby.

Speaking on her podcast, she said: “I’ve got a lovely partner now and I’m very happy, I never saw that coming and I never predicted it.

“I’m definitely having a summer of love, so while I go on a mini-break… who knows, I could come back pregnant.”

Tell us what you think of Gemma’s new ad on our Facebook page @EntertainmentDailyFix.