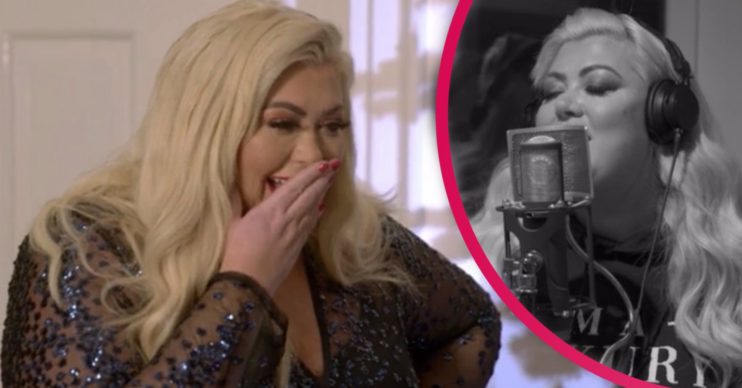 Gemma Collins on GMB: Viewers turned off by her new Christmas song with Darren Day

She's got a Christmas single out!

Gemma Collins on GMB  this Monday morning led to a bit of division with viewers.

Some were ecstatic to see the ‘GC‘ on their screens, while others vowed to switch off their tellies.

The Diva Forever star, 39, was on to promote her new Christmas song with her former Celebrity Big Brother co-star, Darren Day, 52.

The pair have teamed up to record a version of Baby It’s Cold Outside in a bid to ‘cheer up the nation.’

Read more: Gemma Collins looks slimmer than ever as she poses in light blue loungewear

One user tweeted: “Sorry Piers. As soon as Gemma Collins came on screen, I changed the channel. No tears at that point. Just unbridled irritation.”

While another user fumed: “If I chose the two worst people to make a single it would be Gemma Collins and Darren Day and they’ve done it.”

A third user ranted: “Just when you think 2020 has finished with us, no there’s a final kick in the [bleeps]. A Gemma Collins Christmas song. I officially quit 2020.”

Whereas a fourth user declared: “Darren Day, Gemma Collins and Robbie Williams and it’s not even 6.30am. I think I’m going to switch #GMB off.”

But loyal Gemma fans did come out to defend the star.

One user argued: “People being so vile about Gemma Collins, well sod you all I love the girl!”

While a further user defended the GC with: “Not ashamed to say I love the Christmas recording of Baby It’s Cold Outside to raise money for ReThink. They do some great work here in Sheffield including running the Crisis House. Well done Darren Day & Gemma Collins. Thanks for putting the spotlight on mental health right now.”

Indeed, Gemma and Darren’s song is for charity, with 100% of proceeds going to ReThink.

In addition to discussing her song with Darren, she also talked about her upcoming Life Stories episode with Piers Morgan.

Hence she admitted that she’d ‘spilled the beans’ on some deeply personal issues.

And while Gemma may have experienced some trolling online this morning, she has an A List star in her corner.

Robbie Williams has said he believes her song will shoot straight to the number one spot.

In an upcoming episode of Gemma’s Diva At Xmas she is told by Robbie: “Good luck with the new single with Darren, it’s a cracker.