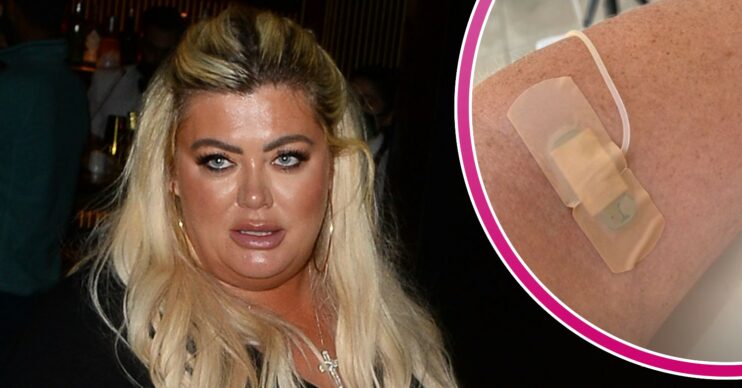 Gemma Collins has admitted defeat and is taking a break after struggling to fight off illness, she has told her Instagram followers.

The GC, 41, has been battling a chest infection for the past week but has finally given in.

Along with a pile of prescription meds, Gemma has also paid for a vitamin drip in a bid to get back on her feet.

Taking to Instagram, she told fans: “Well and truly overdone it.

“I’m looking forward to a weekend of rest and relaxing and getting better.

“As much as I try to carry on, the body sometimes wants you to stop.”

Gemma’s doctor has prescribed her antibiotic tablets, steroids and an antibiotic ear spray.

But in an effort speed up her recovery, she spent Saturday morning hooked up to an IV drip.

At a cost of £349, the former TOWIE star is hoping the blast of vitamins directly into her body will help.

She has shared pictures of the cannula in her arm and the drip set up in her lounge at home.

Gemma first told of her illness during a trip to the hairdressers earlier this week.

The self-confessed diva had visited her stylist Nick for a new head of blonde hair extensions.

When he had worked his magic, Gemma showed off her new look while wearing a pair of dark glasses.

She told fans: “I told you I’d walk out of here a different woman.

“Despite having a chest infection and steroids, I feel totally cured after getting in here.

“Look at that hair, unreal. That’s it, make it bigger, baby.”

Unfortunately, it appears her new big hair did not cure her completely.

Gemma has become particularly conscious of her health over the past four years.

This sees her fat cells being blasted with freezing temperatures.

Gemma has also been trying to get her body in tip top condition so she falls pregnant with her fiancé  Rami Hawash.

In May, The GC revealed she is hoping to conceive with her man this month.

Gemma told The Sun Online: “We are getting to that point where we need to concentrate on having a baby.

“I really want to just rest after August and spend time with Rami and make the baby.

“I’ve given myself a six month window.”

Gemma and Rami got engaged in December 2021.

They have ruled out getting married this year, however, as Gemma is “too busy” with work commitments.

Are you a fan of The GC? Leave us a comment on our Facebook page @EntertainmentDailyFix and let us know.