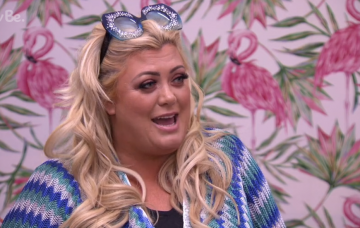 Gemma Collins has revealed she’s recovering well after a recent bite from a gnat left her private parts swollen.

The Only Way Is Essex star detailed her injury to best pal Bobby Norris during Sunday night’s episode of the show.

Gemma, 37, revealed she got bitten “everywhere” on her private parts by the gnat, and the “embarrassing” injury has even resulted in a temporary sex ban for boyfriend James ‘Arg’ Argent.

“The other night I got bit by a gnat on the private parts,” she told Bobby. “It swelled up so bad, it was so embarrassing… It got bit everywhere. Can you believe it?”

Gemma said: “It’s terrible! He’s missing out on the candy. Hopefully, it will go down soon but apart from that life is positive.”

Gemma took to Twitter on Tuesday to give fans an update on her injury.

She revealed the swelling has “gone down” adding: “Let’s just say, thank God for ICE PACKS.”

Meanwhile, during TOWIE on Sunday, Bobby came to blows with Gemma’s beau Arg.

Bobby lost it after Gemma confronted him about a remark he supposedly made.

“Arg said earlier that apparently when someone said, ‘Where’s Gemma?’, you said, ‘On Photoshop,'” Gemma asked her friend.

Meanwhile, Gemma tried to calm Bobby down, saying: “Bob, Bob, I haven’t got a problem.”

Last week, Gemma apologised as she admitted to Photoshopping her head onto models’ bodies to advertise clothes on her online boutique.

During an appearance on This Morning with boyfriend Arg, Gemma said: “Let me clear that up.”

“My company only works with me in the dresses. The women like to see me in the clothes,” she continued. “I stupidly said ‘Photoshop my head. We are entitled to use those images’.

“It was something silly I done. It wasn’t about trying to make myself look thinner. I’m a plus size girl and I’m proud of it.

“Not realising it was a copyright thing. I apologise to anyone now who was offended. I won’t be making that mistake again!”

Have you ever suffered an embarrassing injury? Leave us a comment on our Facebook page @EntertainmentDailyFix and let us know what you think!