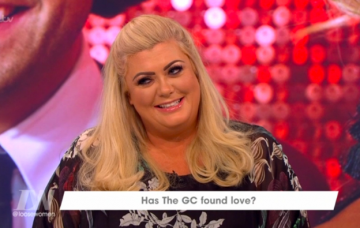 Poor Laurence was sitting in the audience at the time

For those of us who’ve watched TOWIE’s Gemma Collins scowl her way through dates on Celebs Go Dating these past few weeks, get ready to be shocked – as she’s just confirmed she might be getting back with her ex, James ‘Arg’ Argent!

Speaking on Friday’s Loose Women, the reality star confirmed: “Arg actually rang me earlier and he was like, ‘Gem, can I take you on a date tonight?'”

She asked the panellists, Anne Diamond, Denise Van Outen, Andrea McLean and Nadia Sawalha: “What shall I do?”

Gemma and her TOWIE co-star, Arg, 30, have been back and forth with their romance for an astonishing six years.

The Christmas special of the reality show saw Arg finally confess his love for Gemma, but she walked away.

Since Celebs Go Dating aired, Gemma has been dating Laurence Hearn, who she met on the matchmaking show.

And Gemma’s Loose Women appearance was extra awkward as he was literally sitting in the front row of the audience throughout the chat.

Speaking earlier in the interview, Gemma told the Loose Women: “I met the lovely Laurence [on Celebs Go Dating], who’s been amazing. It’s been good fun.

“I’ve had him doing all sorts of jobs. The Sainsburys shop in the snow. He’s been doing all the shelving in the shop. We’ve become great friends.”

But she also admitted she wasn’t sure if she could fall for him, saying: “I’ve waited all this time for The One, and surely you should know. And much as I like Laurence, I still don’t know.”

She added: “My mum loves Laurence. I think she likes him for herself.”

Denise then suggested Gemma, Arg and Laurence could all go on a date together.

Gemma told her: “I don’t think Arg would like that much. No offence, Laurence.”

From his seat in the audience, he told her: “I’ve got thick skin, it’s alright. [Gemma] makes it interesting. Who knows what the future holds.”

When the wedding chat began, Gemma apologised to a wounded looking Laurence, 52.

He generously offered: “I could be best man, or give you away.”

Gemma told him: “You really are the most wonderful man,” before turning back to the panel.

She says: “But you know what Arg is like. It’s been six years. If he doesn’t ask me to be his girlfriend this time, I’m going to move on – definitely this time.”

The diva TV star then told the ladies: “I’ll invite you all to the wedding.”

Denise added: “We can be bridesmaids!” and Gemma tells her: “Yes, yes!”

Could this finally be it for Arg and Gemma? Probably not, but here’s hoping!

Do you think Gemma and Arg can finally make a go of it now? Leave us a comment on our Facebook page @EntertainmentDailyFix and let us know what you think!