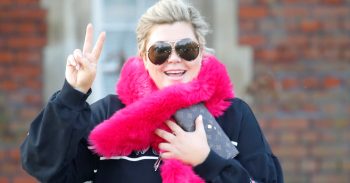 She's offering a variety of items

Gemma Collins is flogging a bunch of her old clothes following her Dancing On Ice stint.

The reality TV star, 38, has listed the clothes on Depop – a website where people can buy and sale clothes – and some clothing items are for sale for as little as £9 and £10.

One item for sale is a floral vest dress from highstreet shop Evans in a size 28, which Gemma is selling for just a tenner!

There is also a red dress from Very which features a zip back and detail on the short sleeves on sale for just £9.

However, fans can also bag some more pricier items including a designer coat for £60, which was originally £350, according to Gemma.

Gemma shared a link to her Depop page alongside the caption: “Lots of items £10.”

Gemma recently revealed she lost two-and-a-half stone thanks to training for Dancing On Ice.

And following her time on the show, Gemma vowed to keep up her health and fitness.

She said on This Morning last month: “I will 100% keep up with the fitness, I’m saying this on national TV because I feel so much better. I can just move a lot more. I can do my shoes up.

“I’ll be honest, I had about three tyres round my middle. They have gone! [But] I’m still a bigger girl. When I got on the scales I was shocked, because I have actually lost two-and-a-half stone, and the inches as well.”

Gemma made headlines every week during her time on the show and her dramas didn’t stop once she left.

Last month, Gemma split from her on-off boyfriend James ‘Arg’ Argent after he posted a video of her snoring online before deleting it.

He also reportedly sent her a string of abusive texts, allegedly saying she had “more rolls than greggs” and calling her a “fat lump”.

However, earlier this month, the pair appeared to rekindle their romance during a trip to Paris.

During an appearance on Good Morning Britain this month, Arg said: “I’m a hypocrite. I struggle with my weight, I’m the biggest I’ve ever been, Gemma looks the best she’s ever been. We were both were cussing each other, it didn’t mean anything.

“I do apologise for anything that I said. I didn’t mean it, it was very childish.”

When asked if he’s going to propose to Gemma anytime soon, Arg added: “Things are definitely better. I love Gemma to bits and I think if we remain stable and we’re in a healthy place, then it’s definitely something I would consider.”