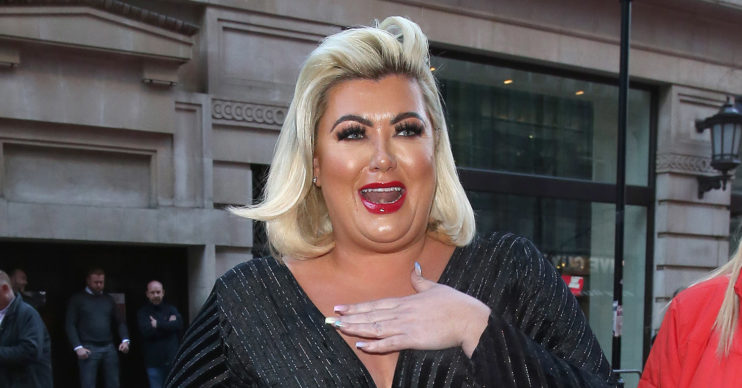 Gemma Collins looks phenomenal as she shows off her latest boutique offerings.

Reality star Gemma Collins has wowed her fan base yet again with another sensational snap.

The former TOWIE cast member, 39, shared a snap of her posing at home to her 1.8 million Instagram fans.

The Diva Forever star is wearing a gorgeous flowing flowery top teamed up with a pair of very stylish leggings.

She explains in her caption that the look is available at her online clothing boutique, which specialises in plus-size clothing.

However, Gemma’s slimmed-down look is what has many of her fans talking.

Some even asked what her glow-up secret was.

One asked: “You’ve got to tell us Gemma how you are looking so slim?”

Another gushed: “Wow lockdown is treating you well Gemma!”

And a fourth wrote: “Absolutely stunning my lovely. You are glowing.”

Another pleaded: “You’ve got to tell us how you look so slim!”

Gemma has been staying with her brother and his family during lockdown.

“Id be really happy if I lost six stone”

On her special lockdown editions of Diva Forever on ITV2, she attempted to take part in a Joe Wicks YouTube PE class.

She also participated in a kickboxing session with her sister-in-law.

Gemma says she has lost two stone over the last year.

She’s said in the past that she hopes to lose a total of six stone, and then have a breast reduction.

The GC told The Sun last year: “I’d be really happy if I lost six stone as that would bring me down to 12 stone and a size 16.

“My boobs are so big and I want to get them reduced in January, but I have to lose three stone before they can operate.”

Former TOWIE star James Argent confessed that he is a recovering cocaine addict.

He confirmed that Gemma had called the paramedics twice over concerns for his welfare.

Now claiming to be off the drugs, he has also lost a considerable amount of weight.

Showing off his weight-loss results on Instagram, he is believed to have already dropped five stone.

What do you think of Gemma’s new look? Share your thoughts with us on our Facebook page @EntertainmentDailyFix.