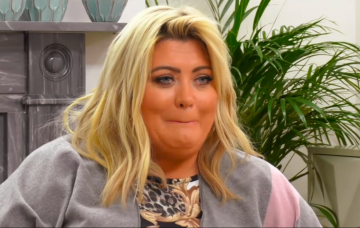 It involves a bar of chocolate

Sunday’s episode of Celebs Go Dating was predictably hilarious and shocking – mostly thanks to the show’s stand-out star, Gemma Collins.

On the previous week’s episode, we saw her leave her date, Laurence Hearn, waiting for her on the platform at King’s Cross St Pancras. The pair had planned to go for a romantic mini-break on the EuroStar, and the businessman had bought two first class tickets – only to be stood up by the TOWIE diva.

“She’s probably still in bed,” he sighed as he watched the train pull away, bidding it “au revoir”.

Clutching a bunch of flowers and a box of chocolates intended for wooing Gemma, Laurence almost seemed to be choking back tears as he sadly plodded away.

But it’s fine because Gemma had the best excuse – she needed to have chocolate and a spray tan.

On the latest episode last night, Gemma arrived at the dating agency, where receptionist Tom was the first to tell her off.

He told Gemma, 37, she should brace herself, and a smirking GC told him: “Ooh, I’m scared!”

Tom shook his head and said her actions were “ineffably egregious”.

“It was what WHAT?” she said, looking confused. “Bad form,” Tom explained.

She went on: “Listen my darling, don’t be disappointed in me, I know what I’m doing. I make my own rules because I am fabulous darling,” she said, slamming the door behind her.

The reality star then sits down with the dating experts Lady Nadia Essex and Eden Blackman, who look thoroughly annoyed.

She told them, smiling: “I know you’re angry with me, so just get it off your chests, I’m ready for ya.”

Eden told her: “Listen, I’ll put it straight, this is the most disrespectful thing that’s ever happened in this agency.”

Nadia shouted: “Somebody’s standing there on the platform with a first class ticket to the Eurostar, and you don’t turn up! Are you joking?”

In her VT, Gemma said: “Whoa, everyone needs to calm down. I can explain myself!”

Then she offered up her solid gold explanation.

She said: “I did get up, I did put my hair and make up on. I got in the car, there was traffic on the road at Leytonstone.

“I went home, I did a marathon of the Kardashians, I had a cheeky bar of Galaxy, I had a spray tan. And I had a beautiful day!”

Eden said: “I’ll be honest with you, I didn’t ever think you’d do this, and that’s the bit that really [bleeps] me off.”

Gemma did eventually seem to feel repentant saying: “I feel terrible, you have a way of making me feel terrible.”

Many fans were seriously unimpressed, tweeting: “I was always a fan of Gemma. But respect goes a long way. The dates @LadyNadiaEssex and @edenblackman set her up with wasn’t rude in anyway. Gentlemen are hard to find.”

Others were amused, with one saying: “Would’ve done the same 🤷‍♀️😂”.

Later in the show, the presenters brought Laurence, 52, into the office, so Gemma could apologise face-to-face.

He told her he waited for two hours on the platform as she said: “Sorry Laurence.”

She then asked him: “Do you think you can find it in your heart to forgive me?”

And he said: “Yeah, I could actually”, as the matchmakers look on, stunned.

He then agreed to another date, as Nadia tells the camera: “Laurence, get a backbone.”

Sadly for Laurence (again), Gemma then went off on a date with Daniel, who she ended up inviting as her date to Cape Verde.

“I never expected us to have so much in common,” Daniel said as Gemma told him: “I’m so happy I met you.”

It is all very nearly romantic.

Are you outraged by Gemma, or do you prefer choc to a date, too? Leave us a comment on our Facebook page @EntertainmentDailyFix and let us know what you think!