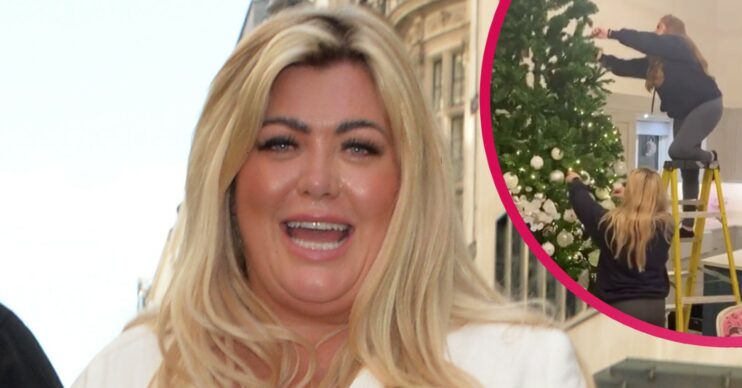 The star has splashed out on a Grinch theme

Gemma Collins has called in a professional team of festive decorators to put up her enormous Christmas tree.

Despite it only being November, the GC has forked out to give her house an elaborate Grinch-themed makeover.

Excited Gemma, 40, filmed the team hard at work as they stood on a ladder to decorate the giant tree.

Posting the clip on Instagram, Gemma said: “The tree is going up, I’m so excited!”

The former TOWIE star then went on to tell her fans that she has paid for the tree decorating service – not accepted it as a freebie.

Gemma wrote alongside her video: “HO HO HO. The Grinch comes to Essex. My house is being turned into WHOVILLE.

“My fave film is The Grinch so why not? Thank you @thefestivegroup for putting all my crazy ideas to life. All I need now is for the Grinch to rock up.”

Read more: Gemma Collins looks the ‘happiest she’s ever been’ as she embraces step-motherhood with Rami

She added: “Also guys this isn’t a freebie. I’m not that sort of celeb.

“Huns, I respect people have to work, everyone needs to eat and I love supporting businesses where I can.

“So many people are takers in life but it’s about giving back, not just take take take. I’m a firm believer in this.”

Gemma’s fans have commented on her festive post in their droves.

Congratulating her, one said: “Well done for supporting a local business! Too many celebs are after a freebie when they can afford to pay!”

A third said: “Love this Gemma. So far removed from the Diva people make mistake you for. You absolutely rock!!”

Gemma is in a really great place at the moment, having moved into her new house earlier this year.

She is also loved up with boyfriend Rami Hawash, who she has reunited with.

Gemma has made no secret of the fact she would like a baby with Rami.

But for now, she has admitted she is the ‘happiest she has ever been’ as she embraces step-motherhood with his toddler son.

Following an autumnal walk with the tot last month, Gemma gushed: “The most lovely day being stepmum to a beautiful three-year-old boy I absolutely LOVE IT.

“It’s so rewarding and just so enjoyable I absolutely love it.”

Has Gemma put her tree up too early? Leave us a comment on our Facebook page @EntertainmentDailyFix and let us know!