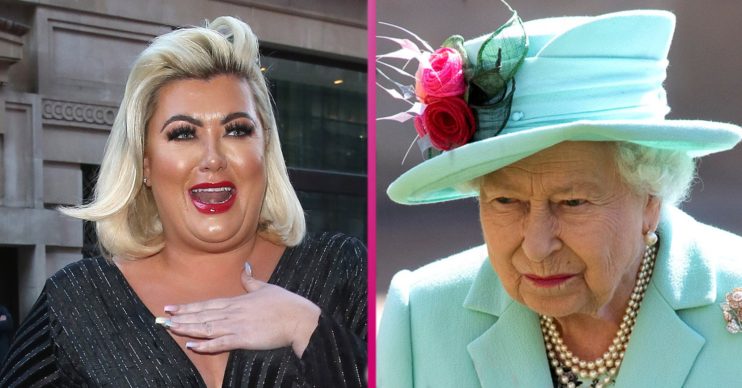 Gemma Collins compares herself to The Queen in hilarious spoof video

The GC seems pretty excited about the new series of The Crown!

Gemma Collins has shared a hilarious video of herself as The Queen.

Much like the rest of the country, it appears the GC is a big fan of hit Netflix series The Crown.

In the week that the trailer for season four was released, Gemma shared a video of herself superimposed on an ad for the show.

Taking the place of actress Olivia Colman, who plays the Queen, Gemma looks quite at home at Buckingham Palace.

Sharing to her 1.9 million Instagram followers, Gemma simply tagged the video with a peace sign and her initials.

Throughout the clip, Gemma is shown quoting her classic Celebrity Big Brother lines.

Oh it’s been busy this year at Buckingham Palace.

She’s then shown getting a neck massage while dressed up as the monarch and says: “Yes I am The Queen. Give us a rub.

The video ends with Gemma commenting: “Yes I am the Queen of England but you can call me Gemma.”

The GC’s fans can’t get enough of it

And Gemma’s fans can’t seem to get enough of the tongue-in-cheek clip.

Another joked: “I’m howling at this!”

Read more: Gemma Collins gets anti-ageing injections in her hands and feet

Gemma often talks about the royal family on her podcast series, and she shared a very strange theory about Buckingham Palace earlier this year.

She said there could be lizard people living among us, and hinted that they may live in Buckingham Palace.

Speaking on her BBC podcast, she said: “My theory is, I believe there are lizards living amongst us. Do these humans that appear to be humans and look like us and act like us go into the tunnels where their human faces, their human bodies. Do they retract back into being lizards when they go into the tunnels?

She also talked about alleged secret tunnels leading to the palace.

‘”It’s unlikely that a tunnel exists linking the palace with the Tube, but an underground tunnel linking to Whitehall and the Houses of Parliament is plausible’… but it is unproven,” Gemma added.