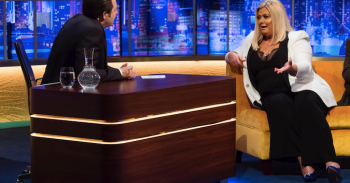 The DOI star said she wasn't sure if she was in love or not...

Gemma Collins and boyfriend James ‘Arg’ Argent are still on the rocks, the reality TV star has revealed.

During an appearance on The Jonathan Ross Show, which airs tonight (Friday 8 March), Gemma admits that she’s not sure if she’s in love with her boyfriend or not.

Her interview comes just days after she reconciled with former TOWIE star Arg, after a huge row which began after he shared a photo of her snoring on his Instagram account.

After she kicked him out, he then reportedly sent her a string of nasty texts calling her “fat” and “nasty”.

Although they soon reunited and enjoyed a brief trip to Paris, it appears Gemma hasn’t quite forgiven and forgotten just yet…

In fact, saying she’s not sure about their relationship during prime-time TV is a pretty good way of keeping Arg on his toes…

During the interview, which Gemma describes as a “dream come true”, host Jonathan asks Gemma if she is in love.

He asks: “Are you in love with anyone at the moment?”

To which she replies: “Sort of and not sort of… I’m going to get some lessons from Harry and Sandra. [They] should set up a training school for young love.”

After she admits she’s only ever been with someone for about a year, Jonathan presses her on her relationship with Arg asking if she’s “sort of single” at the moment…

Gemma says: “It’s complicated, yeah. I’m sick of blokes. I’m sick of them. I’ve just had enough to be honest. My mum and dad have been married 45 years.

The Dancing On Ice star also reveals her alter ego The GC is a “bit like Marmite” and “a bit like Lady Gaga”.

She adds: “What I’m trying to say is that she is a character… Basically I became a caricature of myself.”

Gemma also confirms that she WILL be appearing on Sunday’s Dancing On Ice final.

She tells Jonathan: “I did pull out and then I thought, to everyone that has supported me, for my own self esteem, I am not going to back down to anybody. I am going to walk back in on that show on Sunday night and I am going to skate like it’s the last day of my life.”

She also reveals she’s “waiting for a call from I’m A Celebrity”.

Do you think Gemma and Arg will last? Leave us a comment on our Facebook page @EntertainmentDailyFix and let us know what you think!