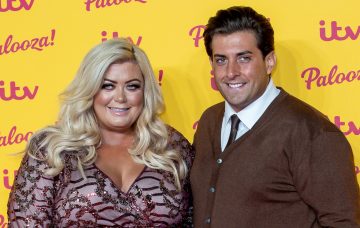 She's besotted by the pooches!

Gemma Collins has begged her boyfriend James ‘Arg’ Argent to get her an adorable Pomeranian dog for Valentine’s Day.

Sharing a string of videos to her Instagram Stories on Tuesday, the former TOWIE star gushed over the two pooches as she shared a cuddle with them.

In one clip of the dogs running around, Gemma wrote: “@real_arg can I have some for Valentine’s?” followed by three red love heart emoji.

In another clip posted minutes later, Gemma is seen holding one of the dogs and giving it a kiss.

She said: “Arg if you’re watching this, I’ll take two for Valentine’s. A lot cheaper than diamonds, my dear.”

“These dogs are absolutely… am I your mummy now?” she asked the dog.

She then kissed the adorable pooch on the head and said: “Oh they smell lovely. Oh my god, they’ve got perfume on them. Is it dog perfume?

“I absolutely love this dog.”

It comes after Gemma was eliminated from Dancing On Ice on Sunday alongside her professional skating partner Matt Evers.

And thanks to her antics on the show, it’s been said she’s already cashing in on her success.

An insider told The Sun: “Gemma’s value and money-making ability has sky rocketed since Dancing On Ice – everyone wants to book her.

Gemma made headlines throughout her time on the show after clashing with judge Jason Gardiner and falling face-first onto the ice during one of her performances last month.

Earlier this week, it was reported that Gemma has had endless offers pour in since her exit from the skating show.

A source told The Mirror: “Gemma is obviously very business savvy and is keen to strike while the iron is hot.

“It could end up being a huge step forward in her career.”

Gemma and Matt were voted out of the competition on Sunday night after receiving 15.5 points out of 40 for their performance.

Later during the skate-off, the pair skated to Whitney Houston’s Queen of the Night.