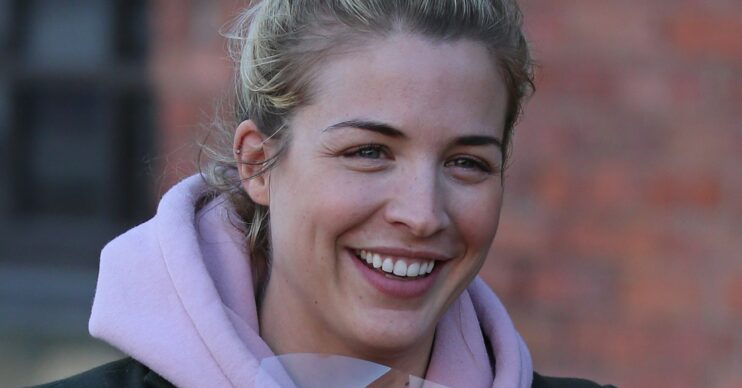 The former Hollyoaks star hit back on her Insta

Gemma Atkinson has hit out at Instagram trolls who targeted her relationship with Gorka Marquez.

The happy pair met whilst on Strictly Come Dancing and have been a couple ever since.

The couple got engaged in February 2021 after Strictly pro Gorka popped the question on Valentine’s Day.

While they’ve been the picture of happiness ever since, some trolls seem determined to try and upset Gemma.

The actress regularly shares updates on her fitness on Instagram, and this week was no different.

However, following one of her latest posts, a few trolls decided to comment on the star’s post seemingly claiming Gorka only stays with Gemma for her physique.

As a result, Gemma shared the comments. One read: “Her bloke will cheat on her if she stops training.”

Other trolls replied with remarks such as: “Starting to look too muscley.”

Meanwhile, another replied: “Love it… But is all this to keep Gorka??”

The former soap star bit back publicly, sharing her thoughts with the rest of her followers.

She said: “We seem to have gone back a few decades.

“Note to anyone starting out with training/health regime. Doing it for anyone but yourself is a setup for failure. Do it for YOU! YOU deserve to feel YOUR best. Shut out the noise and crack on.”

Gemma recently revealed she and Gorka would likely try for baby number two before they walk down the aisle.

The Strictly couple are already parents to Mia, aged two.

Gemma told The Sun: “We’ve said we would prefer to try for another baby rather than have a big, fancy wedding.

“There are people who will spend £50k on a wedding and you think, oh my God. Twice we thought about going to the registry office and just doing it and then having a big party.”

What did you think of Gemma Atkinson hitting back on Instagram? Head to our Facebook page @EntertainmentDailyFix and let us know.