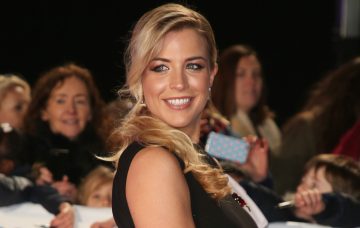 She's gone for the chop!

Gemma Atkinson has debuted a new hairdo after telling fans she was going “for the chop”.

The former Emmerdale actress, 34, ditched her long blonde locks for a new shoulder-length ‘do, featuring a mix of light and honey blonde highlights.

The star first posted a video to her Instagram Stories on Sunday of her hair in foils as she told fans: “We’ve gone for the chop!”

She then posted a video showing a large amount of her hair on the floor.

Finally, the star showed off the finished results as she credited her hairdresser for the new ‘do.

She wrote: “Love it! New colour & cut by @nataliecropperhair_.”

It comes just a couple of weeks after her boyfriend Gorka Marquez also showed off a new hairdo on Instagram.

Beside a photo of himself posing with his new hairstyle, Gorka said: “FEELING FRESH after my new hair cut,” before thanking his barber.

But fans were divided over the new ‘do, with some people loving the style while others told Gorka his hair was “too short on the sides”.

One person wrote: “Looking good fella,” while another said: “How do you get cuter by the day? Please tell me!”

However, a third commented: “Too short at the sides,” while another agreed, commenting: “Should have left the sides on.”

FEELING FRESH after my new hair cut 😎 Thanks bro!! @rossparlane 💈📸

Spanish dancer Gorka has been dating former Strictly Come Dancing star Gemma for a year, after originally becoming friends during the 2017 series.

Speaking to OK! Magazine earlier this month, Gemma revealed the secret to their happy relationship.

She said: “He means everything to me. He’s my best friend. We’ve been together almost a year now and he messages me out of the blue and says: ‘I love you so much I can’t wait to see you.'”

Gemma also revealed that he leaves her sweet messages on Post-It notes on the bathroom mirror.

What do you think of Gemma’s new hair? Leave us a comment on our Facebook page @EntertainmentDailyFix and let us know!