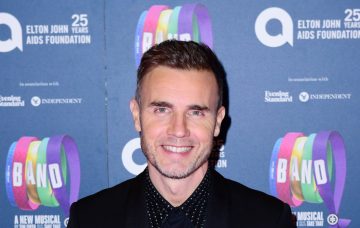 Gary Barlow sharing his grief to help other men

He chose to open up about daughter Poppy's death

Gary Barlow says he wants to be open about the death of his daughter because “men don’t talk about these things”.

Poppy was delivered stillborn in 2012, days before Take That were booked to perform at the closing ceremony of the London Olympics.

The star, 47, tells Desert Island Discs: “For anyone who’s been through anything like this, I think it’s something you accept that you’re going to be dealing with for the rest of your life.”

Barlow, who has three other children with wife Dawn, says: “In a strange way, you don’t want it to end because it’s one of the few things you have to remind you, of the person who’s not there.

“So, in some ways, the pain and the grief brings you closer to them.”

He initially felt that the bereavement was “too painful and private to talk or comment on publicly”.

But he said of writing about the tragedy in his autobiography: “It felt important to me, as a 47-year-old man, to talk about something bad that’s happened and how it made me feel.

“You can pick up several magazines and know how women deal with things… For some reason men don’t talk about those things, so I think it felt it was important for me, as a man, to talk about that.”

Barlow also tells the BBC Radio 4 show how his solo career failed to reach the heights expected of him because his confidence had plummeted.

“For the first time… I  remember a couple of people getting in my head, ‘Oh that’s not very good, you can do better’,” he says.

“Whereas in the past I’d have gone, ‘It’s alright thanks’. It started to get in there and I just lost my confidence.

“So I made a record, my solo album, Twelve Months, Eleven Days, by committee, the worse thing you can ever do….” he said of the flop record.

“The climbing back and the building your creative being again takes years.”

He worries that, when it comes to writing hits, his golden touch will run out.

“I constantly wake with the fear that the little bit of luck that seems to have followed me around for 30 years has now vanished…,” he tells Lauren Laverne.

“I sit and play and sometimes I get something good, sometimes I sit all day and get nothing.”