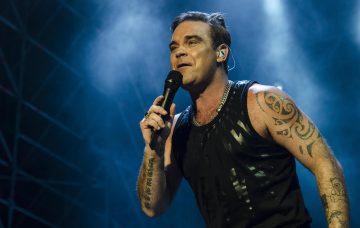 He said Robbie will always be the "baby" of the band

During a chat with The Dan Wooton Interview podcast, the musician said Robbie will always be seen as the “baby” of the band and they’ll always have his best interests at heart.

Gary was asked about an interview Robbie gave to 60 Minutes Australia in February, in which he spoke about his mental health.

Robbie had candidly revealed: “Left to my own devices, I’m inclined to sabotage everything. I’ve got a disease that wants to kill me and it’s in my head, so I have to guard against that.”

Gary said: “We knew before he had come out and told the world about it.

“It’s a bit of a thing with Rob that he’s just designed to now and again just lose it a bit. He just loses his way a bit and it really goes to show how haunted he is by that side of his life.

“We all worry about him constantly. He is still the baby of the band. He was 15 when he joined Take That. He wasn’t even 16, he was just about to turn 16.

Gary added both Take That and Robbie were “disappointed” the star wasn’t able to attend the opening night of Take That’s new musical, The Band.

He said: “We were disappointed and he was disappointed not to make the opening but he’s as excited as we are that the show is coming to London and we would love him to come do something with us for that.”

The star also praised his working relationship with Robbie and said he would never rule out collaborating with him again.

However, that doesn’t mean fans should keep their fingers crossed for a Take That reunion…

But Gary said there was zero chance of Robbie or Jason Orange being involved.

He told The Mirror: “I wouldn’t put money on that. Don’t waste your money. I would say there’s no chance.”

Although they won’t be involved in the greatest hits tour and album, Gary said on The One Show the album will contain all the band’s old classics, including some reimagined versions of iconic songs.

“We’ve reimagined some of the songs, but not all of them. You’ve got to be careful with these things. If you take them too far, you’re destroying people’s memories,” he said.

“We’ve tried to be respectful to the music, but just putting a load of music on an album wasn’t enough for us. We wanted to just go back and have a look through it and try to make it sound better.”

Do you want to see the original band reunited? Comment on our Facebook page @EntertainmentDailyFix and let us know what you think!