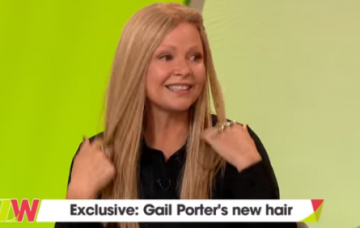 The presenter has some conditions for a new man

The TV presenter’s self-esteem took a blow when she lost her hair due to alopecia and she’s suffered from depression and been diagnosed with bipolar disorder.

But on this week’s Loose Women, she declared she’s putting her troubles behind her and has a new-found confidence after getting a pretty blonde wig.

She said her new hairdo reminds her of her 90s heyday, when she was a pin-up for lads’ magazines and had her naked image projected onto the Houses of Parliament.

Now the 47-year-old has told The Mirror she’s ready to find love again – but she does have some conditions.

She said: “He has to love me bald, not just with hair, because that’s the real Gail. I’m a complete romantic – I have this really Disneyland view of finding a great man.”

The single mum admitted she does “feel very alone sometimes” and she finds it “really hard to trust people in relationships.”

But she’s ready to open up her heart again – she just needs to know where to look!

“It’s not easy to meet someone the older you get and I’m not far off 50 now. They’re all married. Where do I look?” she asked, adding that she doesn’t want to try internet dating.

Gail was previously married to Toploader guitarist Dan Hipgrave, with whom she has a daughter, Honey, 16. They divorced in 2006.

During the last decade, Gail has struggled with her mental health, suffering from depression and attempting to take her own life. In 2011 she was sectioned under the Mental Health Act.

Then in 2017, she was declared bankrupt after failing to pay debts.

Now she’s back on track, she’s speaking out to give hope to others that you can come back from rock bottom.

She’s now planning for a bright future by opening herself up for love again and gaining new work.

She told the Loose Women: “I’m no longer bankrupt. Things just caught up with me and it’s London life and I had bills and everything but I’ve managed to get myself together.

“I’ve got some work and I’ve just finished my book, which was cathartic.”

What do you think of Gail’s new look? Leave us a comment on our Facebook page @EntertainmentDailyFix and let us know what you think!