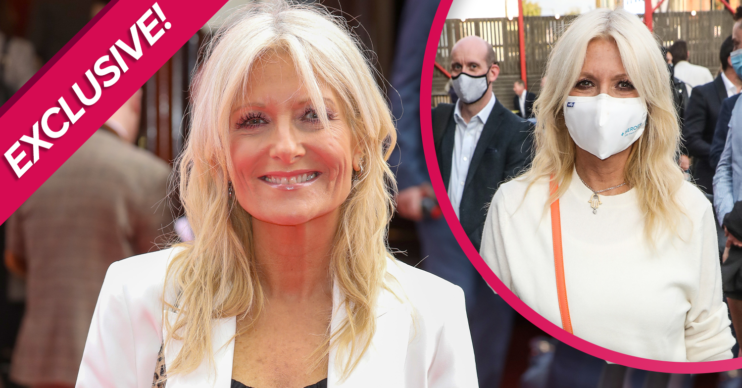 Television presenter Gaby Roslin has revealed her anger at people who refuse to wear face masks in the midst of the coronavirus pandemic.

Speaking exclusively to Entertainment Daily, Gaby also revealed that she was recently accosted by a member of the public and asked why she was wearing one.

Masks are mandatory in shops, restaurants, pubs and bars and on public transport.

And, Gaby told ED!, wearing one is the “kind” thing to do.

What did Gaby Roslin say about face masks?

“It’s shocking the amount of people I know who have died from coronavirus. Another friend’s dad has just died and he was in his sixties,” she said.

“People are saying: ‘It’s my face, it’s not your business.’ But you go: ‘Hold on, it’s not about your face, it’s about you spreading it. It’s not about keeping yourself safe.’ Just be thoughtful and be kind to others,” she added.

Read more: Cerys Matthews hits out at the government’s handling of the pandemic

Gaby said she was out for dinner with friends earlier this week and narrowly avoided a run-in with an anti-masker.

“We were walking back through the restaurant, wearing masks, and one man shouted at me: ‘Why are you wearing a mask?!’

“And all the staff were wearing them and I just thought, I’m not going to rise to it, because I could get into a heated conversation about the amount of people I know who have died from it.

“I thought to myself, I’m not going to get into this because it’s exactly why he did it – he wanted me to say something,” she said.

Gaby also revealed she stepped in after seeing a security guard verbally abused by two “well-dressed women” attempting to enter a homeware shop without their masks.

“He politely said to them: ‘Please can you put your mask on?’ And these two well-dressed women turned round and one of them, at the top of their voice, went: ‘Oh fuck off.’

“I was so taken aback that I stopped to talk to him and said: ‘I’m so sorry those women said that, it was horrible.’ He said: ‘You have no idea the amount of times a day people abuse me.’ Isn’t it shocking?” She added.

Gaby’s new podcast, That Gaby Roslin Podcast, is perhaps the perfect antidote to such trying times.

On it, she’s spoken to Robbie Williams, Dame Judi Dench and Celia Imrie. And she has some pretty big names – including a Hollywood superstar – lined up.

The one-time Big Breakfast presenter uses the show to urge people to spread kindness and joy. And, as a result, her listeners have said they find it a joy to listen to.

Speaking about presenter Caroline Flack’s death earlier this year, Gaby said people should “just be kind” as you never know “what’s going on in somebody else’s life”.

She added: “That was just utterly heartbreaking. Friends of ours have lost family members, too. I think there’s a lot of anger around at the moment and a lot of anxiety.

“It’s fear and anxiety which are this hidden killer and I think that’s really risen to the top and at least everyone is talking about it now.

“We need to try and reign back on the anger and frustration, look after the people who are feeling scared and anxious and the people who have got fun and laughter and can spread it, it’s a wonderful thing to do,” she said.

It’s fear and anxiety which are this hidden killer and I think that’s really risen to the top and at least everyone is talking about it now.

“There’s nothing more horrible than a bully or being cruel or being nasty to somebody. What is the point of that? Nobody knows what’s going on in somebody else’s life.”

Gaby is also passionate about the closure of theatres and the impact the virus has had on the arts.

“Oh don’t. I’ve got very many friends who are in theatre and the arts and I just find it utterly heartbreaking. My heart bleeds for them and I miss live theatre desperately,” she added.

Gaby also revealed that, after watching the Britain’s Got Talent final and its tribute to the musicals, she was left in tears.

She told ED!: “When I watched BGT, when I saw the musicals live, tears were streaming down my face. I passionately love the theatre.”

She added: “I spoke to a friend of mine after the show, a very well-known musical theatre star, and I just said: ‘Are you okay?’ And she said no, that it absolutely floored her.

“Anybody who says this isn’t a real job, oh p**s off. They work so hard and they’re out of work. It’s very very difficult, it’s heartbreaking.”

Gaby thinks Brits now need to pull together and show each other kindness.

“Laughter is the best medicine,” she concluded. “Kill them with kindness and laughter.”

That Gaby Roslin Podcast is available on Apple Podcasts, Spotify and all podcast streaming platforms. Episodes are weekly, released every Monday.