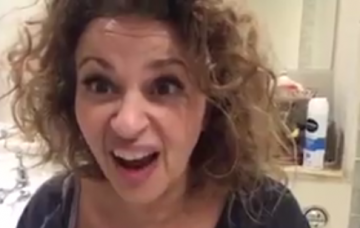 She had a right old rant

Those Loose Women are known for baring their souls, but Nadia Sawalha has taken things to a whole new level.

The 53-year-old panellist posted a video rant to Twitter yesterday, during which she broke some shocking news about her husband, Mark Adderley.

Her face contorting with anger, she revealed that Mark had considered DIVORCING her while she was going through the menopause.

Nadia – who’s been married to TV producer Mark since 2002 – captioned her video: “Whilst Mark and I were filming our podcast ‘How To Stay Married So Far’, he revealed something to me that has utterly blindsided me… I think he said it by accident!”

As the footage begins, the star reveals that she’s in the bathroom “so that Mark can’t hear me”.

And then she begins her confession: “We were just filming our How To Stay Married So Far podcast, and he said there was a point in my menopause when he thought about divorcing me!

“Apparently, I was being very, very difficult. Me? Difficult? In my menopause? What the hell does he mean?!”

Read more: Nadia Sawalha reveals shock reason why she has to wear make-up

Her face then twists and gurns as she tells her followers how she’s feeling inside.

She concludes the clip by saying: “Anyway, was a bit of a shock – but I acted really cool when he told me.”

And fans of the Londoner were quick to offer their support. One tweeted: “I just love these insightful snippets that can bring a big smile, but really Mark????? Oh ssshhhh we’re not meant to know Nadia.”

Another soothed: “Divorce you??!! Fool that he is.”

However, just a couple of hours later, all seemed to be well again in the Sawalha/Adderley household.

The Loose Women star tweeted another message advertising the latest instalment in the couple’s podcast.

She captioned it: “Okay, maybe I wasn’t quite as chilled out about his confession as I remembered,” adding a few laughter emojis.

Earlier this year, Nadia revealed that SHE threatened to leave MARK unless he sought help for his booze problem.

Read more: Linda Robson reveals why she takes a bath in front of 25-year-old son

She told Loose Women: “I gave him an ultimatum. I said: ‘You will not spend another night in this house unless you get help for your alcoholism.’

“I knew he had the most incredible heart of gold – the drinking was a symptom of other things. He suffered from depression.

“But I knew that I was not going to live with an alcoholic.”