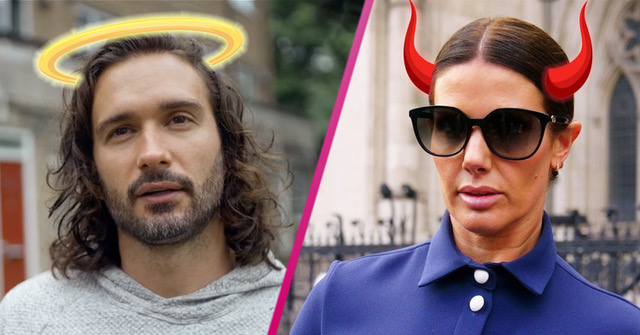 It's certainly been a bad week for some...

It’s officially the weekend and what a seven days it’s been in showbiz land, especially if your name’s Rebekah Vardy.

From Joe Wicks weeping about his childhood and Dame Deborah James’ heroics to Vardy and Coleen Rooney going head-to-head in court, it’s been eventful – to say the least!

So surely there’s no better time than now to introduce our brand-spanking-new feature – every Saturday ED! will look back at our celebrities’ behaviour over the week.

Who’s been angelic? And who needs some time out on the naughty step?

We certainly couldn’t miss the incredible Dame Deborah James from our heroes list this week.

As well as raising nearly £7 million for her Bowelbabe Fund, the podcast host was recently recognised with a damehood.

Her recent achievements have been all the more remarkable as they’ve occurred while she is receiving end-of-life care for bowel cancer.

This week, Deborah revealed the news of her upcoming book and a charity clothing range for In The Style.

With her health hugely fading, Deborah’s fight to change the future of cancer treatment is nothing short of inspiring.

In fact, a few stars a little further down our list could certainly learn a thing or two from her.

If there’s an award higher than a damehood, our Debs needs one pronto.

She’s up there with the likes of Captain Tom – a national treasure we’ve all taken into our hearts, one who’ll sadly be taken from us far too soon.

The nation saw a very different side to the nation’s favourite PE teacher this week.

It seems that behind his star jumps and super-fast-talking as he prepares his recipes, there is a solemn side to our Joe.

In his BBC One documentary, Joe Wicks: Facing My Childhood, dad-of-two Joe bravely opened up on his difficult upbringing and the impact this had on his mental health.

However, instead of letting his parents’ demons break up the family, Joe revealed they worked through their troubles, coming out the other side a “happy family”.

A true bonafide celebrity saint, Joe is most definitely going to A-list heaven!

Following rumours of a bitter fall-out, Pauline Quirke and Linda Robson delighted fans with a reunion alongside their Birds of a Feather co-star Lesley Joseph.

The ladies have been friends since they were 10, so to see them sitting together smiling and happy warmed the cockles of our hearts.

Not only that, speaking after the meet up, Linda revealed a Birds of a Feather TV reunion was also “discussed”.

Fan reactions on Twitter earned them a place on our list, just for the sheer joy the potential news has brought to the masses.

The singer-songwriter came second with his track Space Man, the country’s best result since 1998.

Since then, fans have flocked to social media to label Sam as a “national treasure”.

And we have to agree, with a couple of cheeky tweets submitted as evidence to back up our celebrity saint status!

“Sam Ryder is a NATIONAL HERO and should be the next monarch. Outstanding work #Eurovision,” one tweeted.

Beat the Chasers returned to ITV this week.

However, loyal viewers were stunned to see a new Chaser in the line-up on Wednesday night (May 18).

ITV bosses flew in Australian quizzer Issa Schultz – aka the Supernerd – to join the panel after Anne Hegerty tested positive for coronavirus during filming.

Issa went down a storm with viewers, with some even demanding that he replace Anne for good.

While we would hate to see Anne step away from the show, Issa did add a certain something – especially when he called host Bradley Walsh “Ant and Dec’s dad”!

And now the naughty celebs

When it came to picking a celebrity to top our sinners list, there was only one name that fitted the bill.

She’s snaffled all the headlines this week for her Wagatha Christie trial.

The wife of Leicester City striker Jamie Vardy has been embroiled in a bitter court battle with fellow WAG Coleen Rooney.

While we’re in no way taking sides, Rebekah has been a bit of a naughty girl, as her WhatsApp messages appeared to show this week.

They revealed that Rebekah said Coleen was “up her own [bleep]” and she also called her a rude name when she unfollowed her on social media.

Vardy is also said to have branded her a “stupid cow” who “deserves everything she gets” and was said to have threatened: “I’m not having her bad mouth me to anyone or she will be sorry.”

Coming after the “pigeon poo” comments and “chipolata-gate“, you’ve more than earned that top spot Becky!

Made in Chelsea’s James Taylor

Made In Chelsea viewers were left stunned after James Taylor was accused of cheating on girlfriend Maeva D’Ascanio on the show this week.

Fans of the programme have been gripped by the couple’s complicated romance, with Maeve recently proposing to James.

But soon after forgiving James for embarrassing her by saying no, the stunning brunette was hit with another blow.

A video of James kissing another girl outside the nightclub Raffles was leaked!

The plot thickened when the pair went to Rome together… and came back engaged!

Congrats guys… we think! Or should we be saying good luck, Maeva – you’ll need it with that cad!

The disgraced PM – and his missus – got off Scot-free this week when the Met ruled they didn’t break any more lockdown laws.

Boris got just one fine, for his own birthday party, with Brits up in arms that what they saw as his many other misdemeanours were left unpunished.

COVID aside, there’s one thing we just can’t forgive Boris for, though.

Not knowing who national sweetheart Lorraine Kelly is!

If these two were put in a ring together she’s one Scot who most certainly wouldn’t let him escape justice!

Now we’re not saying wife Steph would agree with Phil’s placement on our list, but we reckon she would if we asked her!

This week Phillip Schofield broke the immortal rule of never commenting on a woman’s weight.

He took a swipe at the Spice Girl formerly known as Posh as he called her “incredibly thin”.

During one edition of This Morning, Phil, Holly Willoughby and Camilla Tominey sat down to discuss Victoria’s comments about weight.

“She’s described the desire to be very thin as an old-fashioned attitude, saying women now want to be curvy. Is there a shift now?” Holly asked.

“Says the incredibly thin Victoria Beckham,” Philip then quipped, taking a swipe at the star.

Later in the show, he angered animal rights supporters when he asked Daisy Payne how to “kill” caterpillars.

Yeah Phil, right in the middle of our celebrity sinners list, please!

Call us psychic, but we have a feeling this little lady is going to be popping up on our saints and sinners list pretty regularly.

This week she angered not only viewers of This Morning but kind-hearted host Holly Willoughby, too.

It all started when Beverley got on her soapbox during a debate about the cost of living crisis.

Holly pointed out that some families were practically living in McDonald’s, brushing their teeth there, sitting there all day, because they can’t afford to heat their homes.

Boo to you Beverley Turner!

What did you think of Rebekah Vardy this week? Leave us a comment on our Facebook page @EntertainmentDailyFix and let us know what you think of this story.