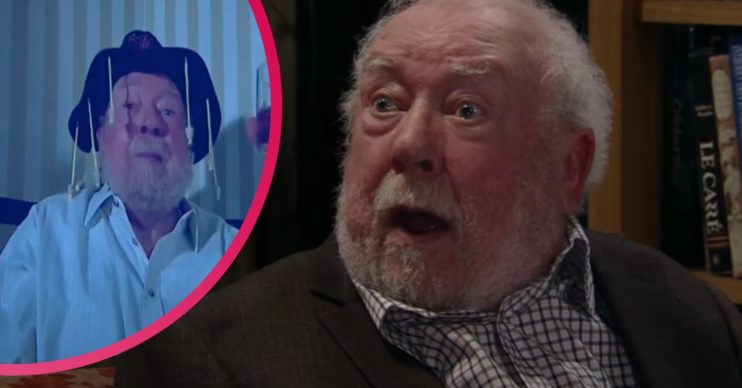 Freddie Jones in Emmerdale: Who did he play and who was his famous son?

The actor has a famous son

Freddie Jones was a respected English actor who had a long career on stage and screen, and played Sandy Thomas in Emmerdale from 2005 until 2013.

Freddie worked extensively on stage and was a member of the Royal Shakespeare Company. He starred in the BBC drama Cold Comfort Farm and also appeared in the David Lynch films The Elephant Man, Dune and Wild At Heart.

He retired from the stage in the 1990s, but in 2005 he joined the cast of Emmerdale as vicar Ashley’s dad, Sandy.

Sandy came to the village in 2005, for son Ashley’s wedding to Laurel Potts. It wasn’t a happy reunion. Relations were frosty between the Thomas father and son because when Ashley’s mother, Dorothy, had been dying from cancer, Sandy had helped his wife die.

That went against Ashley’s Christian beliefs and so he’d stayed apart from his dad.

Initially, Sandy was only meant to stay in Emmerdale for a few months, but the wise-cracking chap proved such a hit with viewers that the show’s bosses convinced actor Freddie Jones, who played the amiable grandfather, to stay on.

When Laurel and Ashley’s marriage broke up, the vicar found it hard to cope with the stress. The pressure led him to start physically abusing his elderly father.

Sandy refused to report his son to the police, realising he was struggling himself, and instead proved a big help, supporting Ashley through his dark times. The father and son came through it stronger and grew even closer.

When Ashley was diagnosed with vascular dementia, Sandy was devastated,  but again he proved strong and looked after his son until he passed away.

After Ashley’s death, Sandy was surprised when Betty’s friend Maisie showed up in the Dales to tempt him to move to Australia and reunite with his old pal.

The lure of the Aussie climate and beaches proved too strong to resist and Ashley departed for Oz, saying goodbye to his friends via a video message.

When Freddie passed away in 2019, aged 91, his character wasn’t mentioned for a while out of respect, though two episodes of Emmerdale were dedicated to his memory shortly after his death.

On screen in 2020, Laurel received a phone call on screen telling her Sandy had died peacefully in Australia.

Freddie Jones and his family

Freddie married fellow actor Jennifer Heslewood in 1965 and the pair had three children together – Toby, Rupert and Casper.

Toby Jones has followed his father on to the stage and screen and is a well known British actor, starring in shows including Detectorists, Doctor Who and Sherlock, as well as the Harry Potter films and two blockbuster Captain America movies.