It's an exciting year for them!

Team GB rower Helen tweeted: “Soooo…The biggest adventure of our lives.. 2 little (chicks) of our own arriving this summer!!! @SteveBackshall.”

She shared a picture of herself posing against a sunset with her baby bump on show, and a snap of Steve staring at two chicks.

Former Strictly Come Dancing contestant Steve shared the same two images on Twitter, and wrote: “On the boat with my three favourite people; seems this summer we’ll have some little ones of our own… @Helenglovergb.”

Helen, 31, and naturalist Steve, 44, married in September 2016 after dating for around two years.

Helen and her rowing partner Heather Stanning won Britain’s first gold medal at the London Olympics in 2012, and in Rio in 2016 they took gold again, becoming the first British female rowers to defend their Olympic crown.

A year ago, Steve said he and Helen were not quite ready for a family so soon after their wedding.

The Deadly 60 presenter told Radio Times magazine in March last year that they were waiting “a few more months, possibly up to a year” before deciding whether to have children.

Fans have been inundating the parents-to-be on social media with congratulatory messages.

One wrote: “Congratulations to you both!! Get ready for your most deadly adventure ever haha. Twins. Eek!”

Another said: “The biggest adventure ride you’ll ever be on! Congratulations to you both!”

And a third added: “Congratulations! So happy for you both. You are going to love being parents and what a lucky one that baby is!” 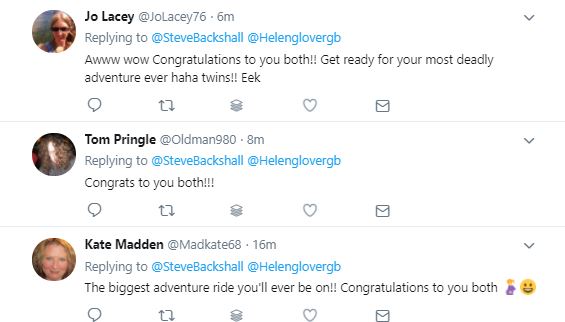 Steve is one of TV’s best known adventurer, wildlife presenters and naturalists, who has also published several books.

He appeared on the 12th series of Strictly Come Dancing in 2014, where he was paired with Ola Jordan. They were the eighth couple to be eliminated.

Who is your favourite Strictly contestant of all time? Leave us a comment on our Facebook page @EntertainmentDailyFix and let us know what you think!