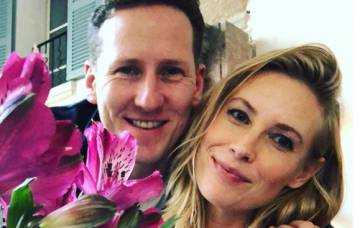 The news was confirmed with a very cute picture

Zoe added: “Thanks for all your kind comments on the arrival of our baby boy. We’re all super in love with him especially big sister Aurélia who can’t bear to let him out of her sight.

“He came right when I asked him to on daddy’s day off. The power of the mind and the universe is good like that.”

Zoe didn’t confirm the baby’s name, but according to The Sun, she and Brendan have chosen the name Danté.

The Strictly dancer – who has been dropped from the BBC show’s next series – announced last September that he and Zoe were expecting a sibling for their daughter, Aurelia, five.

Brendan said in an Instagram post at the time: “Hey all…@thezoecole and I have news…” as he shared a video of Zoe smiling and pointing to her baby bump.

Hey all…@thezoecole and I have news…

At the same time, Zoe shared a picture of her and Brendan looking at her bump with the caption: “Where did that come from?!”

The professional dancer, who is currently on a tour of the UK with his own show All Night Long, recently spoke to The Irish News about how they are feeling about becoming a family of four.

He said: “It’s going to be a very interesting time, yes, particularly with the baby and the tour.

“It’s going to be a whirlwind.

“Our daughter Aurelia is now five, so she’s going to school and you start getting a little bit of life/parenting balance back again and all of a sudden we’ll be right back to the nappies and everything.”

Brendan added that he was “not quite as excited this time around” as “you know what’s coming and it’s a tough gig”.

But he said he couldn’t “wait to meet the little person.”

Now the wait is over! Congratulations Brendan and Zoe!

Will you miss Brendan on Strictly? Leave us a comment on our Facebook page @EntertainmentDailyFix and let us know what you think!