This is just amazing!

The British soap stars, best known for playing Mitzeee Minniver and Liam McAllister in the Channel 4 show, fended off competition from short films DeKalb Elementary, The Eleven O’Clock, My Nephew Emmett, Watu Wote/All Of Us at the glittering ceremony.

Collecting the prize, Rachel delivered her speech in sign language saying: “I made a promise to our six-year-old lead actress that I’d sign this speech.

“My hands are shaking so I apologise.”

She added: “Our movie is about a deaf child being born into a world of silence.

Read more: Dancing On Ice star breaks down in tears during rehearsals

“It’s not exaggerated or sensationalised for the movie, this is happening, millions of children all over the world live in silence and face communication barriers and particularly access to education.

“Deafness is a silent disability, I want to say the biggest of thank yous to the Academy for allowing us to put this in front of a mainstream audience.”

Rachel wrote, produced and starred in the film about childhood deafness after she became passionate about the issue when her father became deaf when she was young.

Her father lost his hearing when she was twelve years old and lived the last two years of his life profoundly deaf.

She learned sign language and has since become an advocate for deaf awareness and ambassador of the National Deaf Children’s Society and DeafLinks.

Chris – who is engaged to Rachel – served as director on the film, focusing on a deaf four-year-old girl named Libby, played by deaf actress Maisie Sly, who lives in a world of silence until a caring social worker teaches her the gift of communication.

Rachel is one of just a few actresses to give their Oscars acceptance speeches in sign language.

Jane Fonda signed part of her speech as she accepted the best actress award for Coming Home in 1979, as did Louise Fletcher who signed to her deaf parents when she won best actress for One Flew Over The Cuckoo’s Nest three years earlier.

Marlee Matlin, who is deaf, also signed when she won best actress for Children Of A Lesser God in 1987.

She was among those who congratulated Rachel on her win, tweeting: “YAYAYAY!!! The Silent Child produed by Rachel Shenton just won an Oscar. Sign Language at the Oscars once again!! SO PROUD of you Rachel!” 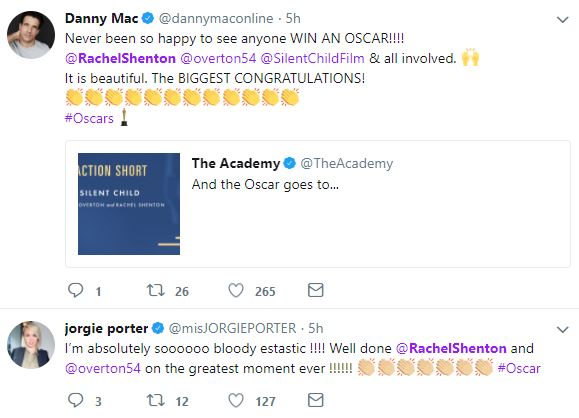 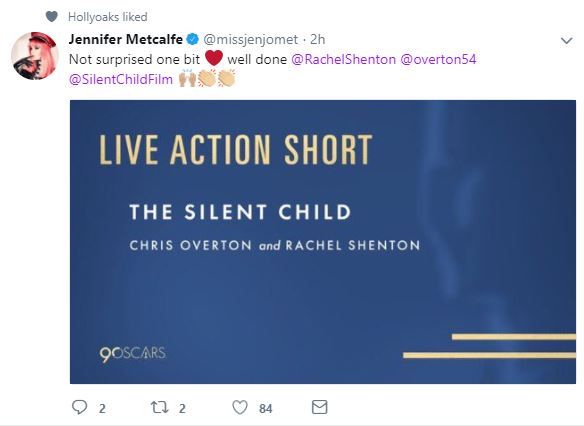 The duo’s former Hollyoaks co-star Jorgie Porter was among those tweeting a message of congratulations following their win.

Danny Mac tweeted: “Never been so happy to see anyone WIN AN OSCAR!!!! @RachelShenton @overton54 @SilentChildFilm & all involved. It is beautiful. The BIGGEST CONGRATULATIONS!”

There was also a message sent on behalf of Hollyoaks, which read: “Massive congrats to @RachelShenton for her #Oscars win! Everyone at #Hollyoaks & @LimePictures are immensely proud. @SilentChildFilm is an inspirational, beautiful story, and we send all our love for her very worthy win.”